I went to this contemporary dance program last night at the Flynn. "Ultima Vez" is the name of the Brussels-based company. 90 minutes of pure energy and movement. No intermission, to have one would have broken up the flow of it. They are not acrobats, but there was that aspect to it. It reminded me of some of the dances by Martha Graham and had a bit of the humor of Pilobous.

It was their USA premiere for "Spiegel," a look-back of 20 years work by the director of the company, Wim Vandekeybus. 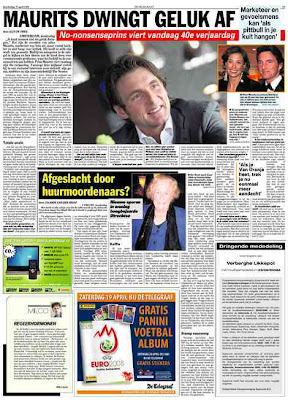 Quotes from his Telegraaf interview (translated by Joris in the BRMB)

About living under a looking glass:

"As a member of the Orange family you must remain close to yourself. When there is such a continuous attention on you there is the danger of drowning."

"We will surely have a party. Although this 40 years milestone doesn't anything special to me. We will just give a "lekker" (= cool) dance party. Life passes quickly, one should celebrate the moments when things go well."

"I feel relaxed in Amsterdam, whevever I am. At school there is a mix of [children of] people both with a moderate income as well as millionaires. But one cannot see the difference! They all come on their bikes bringing their kids. And nowhere you can a drink on an outdoor terrace or have a dinner out like here. And there is only one Albert Cuyp." [daily market]

Barack Obama has this to say about impeachment [emphasis added]:

"I often get questions about impeachment at town hall meetings and I've said that is not something I think would be fruitful to pursue because I think that impeachment is something that should be reserved for exceptional circumstances."

Nothing "exceptional" going on here, not to worry. Just the wholesale shredding of the Constitution, and the wholesale destruction of people's lives around the world.

The Vermont Democratic primary on Town Meeting day last month was a blowout for Obama. At town meetings in March '07, 31 towns in the state voted for impeachment of Bush and Cheney. Such is the craziness of 'progressive' Vermont politics that I daresay most of the impeachment, anti-war crowd from last year ended up backing Obama this year. And they'll probably give Peter Welch and Patrick Leahy a nod in September's state primary, too. Ya think?
Posted by JayV at 8:20 AM No comments:


Diebold Accidentally Leaks Results Of 2008 Election Early
Posted by JayV at 10:14 AM No comments:

DON'T TREAD ON ME 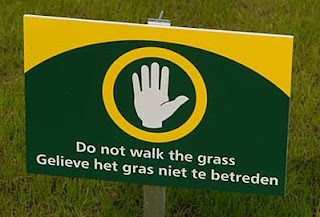 Sure we know what they mean, but this was found at the Keukenhof, the world’s largest flower garden, surely beautiful yet pricy and often overrun with tourists. In other words, you would expect them to write proper English and have pride in doing so.

Oh oh. The website has its problems as well, never mind that you can be welcomed in many different languages.

One highlight:
“Keukenhof offers you the opportunity to see millions of bulbs in flower”
Should be “in bloom”.

We could also make ‘walk the dog, walk the grass’ jokes. But the tulips are pretty.

THAT'S CAPITALISM FOR YOU: EVEN WHERE'S PLENTY, THERE AIN'T ENOUGH

I've just ordered Raj Patel's Stuffed and Starved: The Hidden Battle for the World Food System. It'll be my reading during my plane trip to Amsterdam next week.

The warnings about soaring global food prices are just flooding in. From the IMF riot to the food riot. Aside from causing starvation among large swathes of consumers, fluctuations in global commodity prices typically wreak the most havoc for small producers. Multinationals and agricommerce don't have this problem, because they are diversified and have the resources to wait out slumps or spirals. While the chaos resulting from the subordination of basic human requirements to global markets can cause social collapse, an erosion of the moral geography, and intensified social conflict of the kind that has afflicted Sudan and pre-genocide Rwanda, the people who are meant to make money from it keep making money from it. Currently, the emphasis on biofuels and the shift of investors away from bad bets in subprime to staple goods have conspired to drive the prices up. So, although there is more than enough rice to meet every individual's dietary requirements, we are told there is a 'scarcity'. That's capitalism for you: even where's plenty, there ain't enough.

In light of all this, I have some questions. To wit: what is that shit you're eating? Why are you so fat, yet malnourished? Why is it that for the first time the number of obese people (1 billion) exceeds the number of starving people (850 million)? And how are those two facts related?

Answers here.
Posted by JayV at 6:42 AM No comments:

Sorry for the late notice:

Green Democratic Alliance meets tomorrow (Sunday) at 2:00 PM in the community room at Fletcher Free Library (College & South Winooski). Discussion topics will be city issues (there are 4 election items on Monday's City Council meeting schedule) and plans for its recruitment outreach in the summer. This meeting is open to the public. See Agenda.
Posted by JayV at 8:45 PM No comments:

BUSH ABDICATES TO THE GENERALS ON IRAQ

War turns Republics into dictatorships. The logic is actually quite simple. The Constitution says that the Congress is responsible for declaring war. But in 2002 Congress turned that responsibility over to Bush, gutting the constitution and allowing the American Right to start referring to him not as president but as 'commander in chief' (that is a function of the civilian presidency, not a title.)

Now Bush has now turned over the decision-making about the course of the Iraq War to Gen. David Petraeus.

That is not a Republic. That is a military dictatorship achieved not by coup but by moral laziness.

MAGIC MOMENTS FROM THE HEART OF THE JUNGLE KINGDOM!

Labels: SEND-UPS, spoofs, you can't make this stuff up

ROYAL HANDSHAKES ASSURE US SUCCESS IN AFGHANISTAN AND IRAQ

THE HAGUE (AP) - In a Joint Communiqué issued here by Her Majesty the Queen and President George Bush, it was announced today at Huis Ten Bosch, the royal residence, that the State of New York will be returned to The Netherlands and become New Netherland, an autonomous part of the Kingdom.

Also, it was also announced in London by Buckingham Palace that President Bush met secretly with Queen Elizabeth II in anticipation of his last European tour, dubbed by some pundits as the "Last Hurrah 2008." At a Palace high tea, it was confirmed that, by Executive Order, the United States will join the Commonwealth. The Prince of Wales will leave for Washington immediately to become the Governor-General of the United States. The Prince and the Duchess of Cornwall will take up residence at Mount Vernon, the former home of the first president of the US. “The estate on the banks of the Potomac will be an ideal location for organic gardening and the establishment of a Community Sustainable Agriculture farming scheme to assist inner-city Washington youth,” said The Prince’s Trust in a press release.

Analysts say both maneuvers will shore up support of what had become a coalition of the unwilling in the Afghan and Iraqi debacles. The Dutch mission in Afghanistan has become the most accident-plagued and expensive operation in recent Dutch history, however the announcement from The Hague assures that Dutch armed forces will remain indefinitely. This trade off recalls the Dutch-Anglo treaty in 1674, when the Netherlands obtained Suriname in exchange for relinquishing control over New Amsterdam. "What goes around, comes around," said a delighted Queen Beatrix. The agreement also assures that Heineken brewery will have sole distributory rights to provide kegs for US troops in Iraq and Afghanistan.

Although Prime Minister Gordon Brown, following the wish of the population of the United Kingdom, had expressed a desire for British troops to return from Iraq, the decision to give the US commonwealth status was linked to the success of the surge, particularly in keeping British forces in Basra and would give the US a much needed boost to its morale and air attacks in the region. It is also rumoured that the president will become George, Baron of Crawford, in the Queen’s annual birthday honours list. It has already been confirmed that the United States will participate in the next Commonwealth Games.
Posted by JayV at 8:32 AM 1 comment:

Labels: April 1
Newer Posts Older Posts Home
Subscribe to: Posts (Atom)
"So keep fightin' for freedom and justice, beloveds, but don't you forget to have fun doin' it. Lord, let your laughter ring forth. Be outrageous, ridicule the fraidy-cats, rejoice in all the oddities that freedom can produce. And when you get through kickin' ass and celebratin' the sheer joy of a good fight, be sure to tell those who come after how much fun it was." - Molly Ivins 1944-2007