On Sunday, October 2, over 150 Vermonters will stand in solidarity with those who have been tirelessly occupying Wall St. to protest corporate greed. Please join! 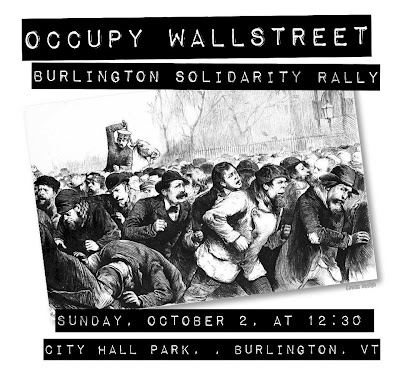 I knew of the tradition of male homoerotic art (Robert Mapplethorpe, Andy Warhol, Hoyningen-Heune, Jean Cocteau, Keith Haring, Tom of Findland, Horst P. Horst), but, incredibly, I didn't know of Baron Wilhelm Von Gloeden, photographer of male nudes, who was born 16 September 1856 near Wismar, Germany. He was a handsome man and has a fascinating biography. Like Thomas Mann, he was from the very northern part of Germany, but was attracted to the south (Italy), moving to Sicily for health reasons. He settled in Taormina, 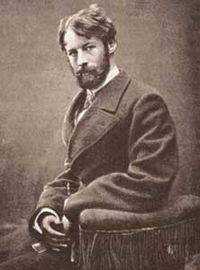 and died there in 1931. After his death the fascists destroyed three-quarters of the negatives of his photos because they thought they were pornographic.

Maurice Gilliams was born in Antwerp in 1900, the son of a Flemish printer and a French-speaking mother. Though he grew up bilingual in French and Dutch, he chose Dutch as the primary language of his poetry. He wrote only sixty-eight poems. He died in 1982. I have not read any of Gilliams' poems until a friend posted "Herfst" on his Facebook page today.

After the summer it is an old men’s land,
here yawns the heath in its vicious gall;
the brown of oaks smells of dogs,
the village glows in its October bells.

The honey drips wearily in earthenware pots
at which hands unite for consolation;
and lonely last the millstones’ revolutions,
the castle stands in its moat and rots.

Deathbeds gleam with the gold of the fathers,
it’s evening and the sons see the wonder:
their birthplace submerged in mist, and yonder,
youth and love and everything still farther.


Generally, Gilliams’ mode is simple — even when grand and archaic, precise, and solemn. The early poems in particular are influenced by Expressionist painting in their colourful images that project a feeling of being torn between vitality and nostalgia. Many of Gilliams’ poems are determined by what was lost, was never had, or came too late: youth, parents, love, a child, a dream of perfection. The background often recalls the Flemish countryside which in the poet’s imagination becomes a barren wasteland, a site of melancholy and desertedness. In other poems, the urban environment of Antwerp is present as a location of death and decay. The later poems highlight the theme of fruitlessness — in life and in poetry. Yet there is an existentialist kind of acceptance, a toughness when facing an inescapable fate.

Once 80 families lived here. Now, along the U-shaped drive that they called home, blue and ochre and yellow mobile homes sit vacant, still displaying the gaily striped awnings or porches, American flags and flower boxes that marked stability and a sense of place. Amidst a sea of very green grass and soft mud, some homes have windows knocked out or tilted slightly askew, others appear hardly untouched, only the wrinkled siding or a dim mud line part way up the walls hinting at the fetid devastation that awaits inside.

Not surprising. Mobile home parks are usually not in the most "desirable" neighborhoods; people choose the location because it's affordable. This type of devastation is common whereever hurricanes land - flood zones in Florida, Lousiana, Texas, the Carolinas; where the rivers rise in the spring and summer (e.g. Mississippi); and also in the tornado alleys in the south and midwest.

Glad that Digger story corrects the stereotype that mobile home residents are trailer park trash.
Posted by JayV at 9:18 AM No comments:

Rawagede is one of the most notorious events in the history of Indonesian struggle for independence against the Dutch. Witness accounts from survivors (Dutch-Indonesian-Sundanese) say that some young males of 11-12 years old were among those massacred!


"I never thought they would kill us because we were just ordinary people," says Saih. "I only realised [what they were going to do] when they began the countdown... Een, twee, drie." Three soldiers started shooting the men in the back.

On 9 December 1947, Dutch troops attacked the village of Rawagede and, according to the villagers, killed all the men - 431 in total. A 1969 investigation by the Dutch government into war crimes in Indonesia says 150 were killed in Rawagede. A suit was brought before the Dutch by survivors of the massacre, asking for compensation. In 2009, the Dutch attorney general rejected that civil claim put forward in September, 2008 because the case was too old.

I wrote about the massacre in Java here, here, and here.

Now there's a been a change with a ruling on Wednesday by the district court in The Hague.


Seven widows, one daughter and a survivor of the massacre of hundreds of men from the village of Rawagede have taken the Dutch state to court, calling for compensation and official recognition of the actions of Dutch soldiers. The claim was rejected by the attorney general in 2008 because it was too old. But The Hague court said the state cannot use that as a defence because the case is about people who were direct victims of Dutch army war crimes. [...] The Netherlands has never paid compensation to the victims' families or officially apologised for the killings.

A super majority of 10-4 was needed to override Mayor Kiss's veto of the community standards resolution on climate change partnerships. That didn't happen; the vote was 8-6. Disappointing and not unexpected. Republicans and conservative Democrats don't seem to want advisory ethical standards. In 72 hours No Lockheed organisers were able to bring citizens to the meeting to speak out in favor of the override. Not as many as the 100+ that spoke in favor of community standards when council approved the resolution on August 8. The BFP quoted me: '"Without guidelines, you're going into (collaborations) blindfolded."' . Last night there were eloquent words citizens and some city councilors. Councilor Bram Kranichfeld... stressing that the resolution was advisory and not binding (as I did in my remarks). He refers to an unnamed councilor [it's my Ward 5, conservative Dem councilor Shannon] and the mayor who were misrepresenting the resolution. Councilor Emma Mulvaney-Stanak
Posted by JayV at 2:55 PM No comments:

Newer Posts Older Posts Home
Subscribe to: Posts (Atom)
"So keep fightin' for freedom and justice, beloveds, but don't you forget to have fun doin' it. Lord, let your laughter ring forth. Be outrageous, ridicule the fraidy-cats, rejoice in all the oddities that freedom can produce. And when you get through kickin' ass and celebratin' the sheer joy of a good fight, be sure to tell those who come after how much fun it was." - Molly Ivins 1944-2007