This Tuesday evening come show your support for an INDEPENDENT investigation into the police brutality in Burlington.

Mayor Weinberger has let the Burlington Police investigate themselves as to whether shooting protesters performing civil disobedience on July 29th was justified. The police preliminary incident report itself is marked by many factual errors and misrepresentation and a sheer lack of accountability that many feared would be the result of having an organization with such a vested interest investigate themselves. T

Tuesday August 28th, Burlington Police Commission will receive the BPD incident report about July 29th. The meeting is open to the public.

Here is part of their letter:

"While we are grateful to the BPD for conducting their own investigation, we hope that an independent investigation will help build public trust in our police force and provide a forum through which to answer pressing questions...

"It is our sincere hope that with a complete and independent review, we can determine the sequence of events and why actions were taken and, more importantly, how we can respond differently in the future."

Some of the questions that this preliminary action/incident report (conducted by the police themselves) did not answer and still need answering include:

■ An understanding of the kind of training officers receive to deal with “de-escalating protests.”
■ The mayor’s involvement in preparation for the protest and whether he authorized the use of “pepper spray and rubber bullets.”
■ Whether the police had exhausted methods short of force to disperse the protesters.
■ Why, as no arrests were made, the police used pellets and pepper spray.
■ Why those pellets were beyond their expiration date.
■ Whether officers removed their badges, and if so, why?
■ Whether all of the officers involved in the use of force were Burlington police officers.
■ Whether the officer who gave the order to use force was present.

Neither of our Ward 5 City Councilors, Joan Shannon nor Chip Mason, have signed on to their colleagues' letter to the mayor. Why haven't they? Don't they have questions, too? Why are they not demanding an independent review? As City Council President, why has Joan Shannon not demanded that the police incident report be presented to the full city council on the day that the police commission receives their copy?

I've seen first hand how police wrongdoing and abuse has lead to a breach of trust in other cities where I've lived. And I won't stand by and let that happen in Burlington.
With people's rights being trampled by police all over the country, it is crucial that we set a precedent that this is unacceptable in Vermont, and that Vermonters
don't just let something like this happen and then do nothing and forget about it.

On This Day: Sara Teasdale

There Will Come Soft Rains

There will come soft rains and the smell of the ground,
And swallows circling with their shimmering sound;

And frogs in the pools singing at night,
And wild plum trees in tremulous white;

Robins will wear their feathery fire,
Whistling their whims on a low fence-wire;

And not one will know of the war, not one
Will care at last when it is done.

Not one would mind, neither bird nor tree,
If mankind perished utterly;

And Spring herself, when she woke at dawn
Would scarcely know that we were gone.

The poem was written right after "the war to end all wars." An indictment surely on the devastation of nature by humans, who would not be missed by the birds and the trees. Our disrespect towards every living thing continues in this century.Unfortunately now we make the robins and other creatures pay too with our radiation and chemicals. My mother's favorite poet. We read this poem at my parents' memorial service when their ashes were deposited in the ground with a cherry tree at the Vos summer house in Zeeland (NL). We read Sea Fever, by John Masefield, too, because my father had sailed ships in his career.
Posted by JayV at 9:28 AM No comments:

On going in Burlington: JOIN THE CITIZENS BANK PICKET 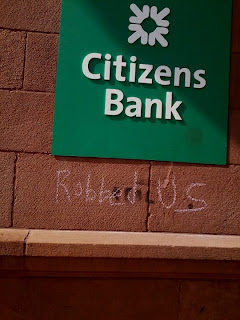 On April 29th, the Occupy Burlington General Assembly issued its first demand: that Citizens Bank, a wholly owned subsidiary of the most bailed out bank in the world (RBS) which had recently settled for $137.5 million after being caught defrauding its low income customers, close its downtown branch and leave our city. To make this demand a reality, the local movement has been maintaining pickets four days per week in front of the branch, waving signs, unfurling banners, handing out literature, and encouraging the bank's customers to move their patronage to a cooperative, member-owned credit union. If you'd like to learn more about this campaign and help stick it to one of the world's biggest "Too Big to Fail" banks, join us at the corner of College and St. Paul Streets. They're every Monday, Wednesday, and Friday from 4 to 5 P.M. and on Saturday mornings from 11 until Noon. Citizens Bank is Closing! Citizens Bank's parent company, RBS, was fined in excess of $200 million for their participation in the LIBOR affair."There was plenty of harm and plenty of foul," says Eliot Spitzer. 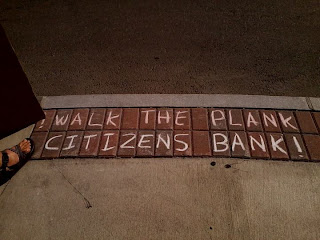 Photos credit LisaAnn Oberbrunner.
Posted by JayV at 9:58 AM No comments:

Labels: Burlington, citizens bank, civic activism, picket, spitzer, Vermont
Newer Posts Older Posts Home
Subscribe to: Posts (Atom)
"So keep fightin' for freedom and justice, beloveds, but don't you forget to have fun doin' it. Lord, let your laughter ring forth. Be outrageous, ridicule the fraidy-cats, rejoice in all the oddities that freedom can produce. And when you get through kickin' ass and celebratin' the sheer joy of a good fight, be sure to tell those who come after how much fun it was." - Molly Ivins 1944-2007