NO LOCKHEED IN THE NEW YORK TIMES

In case anyone missed it. It was the lead story in Thursday’s National section of the New York Times.


Ms. [Anna] Guyton and Jonathan Leavitt, a community organizer, have sought to rally opposition with leafleting, forums at local colleges and a blog. They are also circulating a petition for a ballot question that would urge the mayor “not to enter into agreements with corporate war profiteers like Lockheed Martin.”
Meanwhile, Liza Cowan, a local artist, is circulating an eye-catching series of “No Lockheed” prints to draw attention to the issue. She said she was especially unhappy that the letter of cooperation mentioned “possible support” for Burlington’s public schools. Six years ago, she fought the sponsorship of a reading program by General Dynamics, a military contractor that had a branch here at the time, which distributed pencils and books stamped with its corporate logo at local schools. “It just seems like this was going to be the same thing but on a bigger scale,” she said.
Ms. Cowan also raised another common theory: that the partnership was an attempt by Lockheed to win local support for basing its F-35 fighter jets at Burlington International Airport. The Vermont Air Guard already flies F-16s here, and the Air Force has said Burlington is one of two possible bases for the F-35s.

A Burlington citizen activist group NO LOCKHEED and Bill McKibben have issued a challenge to Lockheed Martin as its influence seeps into the City of Burlington (Vermont, Planet Earth):

As a concerned citizen of Burlington, VT I feel obligated to let you know that the overwhelming majority of residents here seem strongly opposed to the proposed partnership between Lockheed Martin and the city of Burlington to address the impeding threat of climate change. Surprisingly, many people aren't opposed to the idea solely because you happen to be one of the world's largest arms manufacturers, but mainly because you don't seem to have much of a proven track record when it comes to addressing climate change. You see, here in Burlington we really pride ourselves on the notable efforts we've already made to reduce carbon emissions and develop sustainable communities, and we're rather reluctant to invite anyone into our town who doesn't already have a wealth of experience doing the same, regardless of their net worth. Otherwise what's the point, right?

Perhaps you've heard of climate change expert Bill McKibben. In a recent Burlington Free Press article McKibben says of Lockheed, "The fear that they could be just greenwashing is real -- for instance, these guys belong to the U.S. Chamber of Commerce, which has opposed every single good idea on energy and climate for decades; to me, that's a sign they're willing to make money on climate, but still work in Washington to prevent meaningful progress." This is your big chance to prove otherwise.

McKibben's NGO 350.org. It's an international non-profit dedicated to stopping climate change. 350 just launched a new campaign 'The U.S. Chamber Doesn't Speak For Me' to "show that when it comes to climate and energy, the U.S. Chamber of Commerce represents the interests of big polluters, not everyday American business." According to a recent New York Times article, ("Justices Offer Receptive Ear to Business Interests" 12/18/10),"[The Chamber of Commerce] board includes executives from some of the nation's biggest companies, including Lockheed Martin." The Chamber of Commerce filed a brief in a Supreme Court case stating, a suit by eight states against power companies over carbon dioxide emissions, 'has potentially disastrous implications for the U.S. business community."

The New York Times article links to the Supreme Court brief (American Electric Power Company Inc., et al. v. State of Connecticut, et al.) which shows the lengths the Chamber of Commerce and its corporate partners, including Lockheed, will go to block carbon reductions.The brief implies that the states’ efforts to regulate C02 emissions are “ill-conceived policies and measures which could damage the economic security of the United States.” It belittles the states’ earnest litigation to address the climate crisis as an example of “nuisance suits,” which are “an especially ill-conceived and constitutionally illegitimate response." Like Mom always said, "you'll be judged by the company you keep." Right?

So we have thought of a great way you could prove your commitment to addressing climate change to the citizens of Burlington so someone other than Mayor Kiss might be a little more supportive of this proposed partnership. Would you be willing quit the US Chamber of Commerce and prove to us you really are committed to addressing the climate crisis? You see, like McKibben says, the U.S. Chamber of Commerce has maintained a hard-line opposition to any legislation addressing the climate issue, so it's very hard to take anyone seriously who says that they want to address this issue while maintaining their involvement with them. You wouldn't be the first corporation do to so either! Apple, Nike, and Johnson & Johnson have all quit the U.S. Chamber of Commerce for this very reason! Even utility companies such as Exelon, Pacific Gas & Electric, and PNM Resources resigned from the Chamber over its environmental policy. Won't you be the next brave corporation to show your commitment to addressing climate change by quitting the U.S. Chamber of Commerce? It sure would help the citizens of Burlington take your proposal a little more seriously...

Looking forward to hearing from you,

Will Bennington, Farmer and Community Organizer

One of Germany’s most well-known and influential artists, Anselm Kiefer, was invited by the Rijksmuseum to create a work of art inspired by The Night Watch. The result, the spectacular La berceuse (for Van Gogh), for which he was given complete free rein, will be on display in the Rijksmuseum’s Night Watch Gallery in the Philips Wing from 7 May.

Sorry I am missing this. A few years ago there was an Anselm Kiefer exhibition at Montreal's Contemporary Art Museum; I was blown away. Anselm Kiefer is a dark artist, heavily influenced by Germany during WWII. He is one of my favourite artists. Also Anton Corbijn (another favourite) will have an exhibit of his photographs of Kiefer. 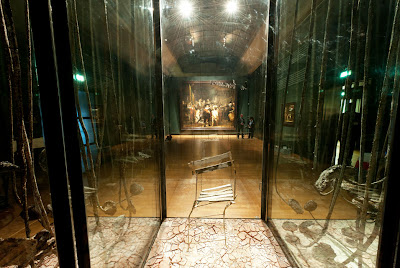 ROYAL ICING ON THE CAKE

I wasn't taken with all the hoopla surrounding the 'royal wedding' last week, but as I love food (especially desserts)...

An exhibition in London of recreated royal wedding cakes was at the Wellington Arch in London prior to the wedding of Catharine Middleton with Prince William. It's already closed, so you'll have to imagine all the scrumptious delights!

Click here and scroll down to Julie Walsh's replica of Lady Elizabeth Bowes-Lyon and Prince Albert's wedding cake. Chef Julie taught me patisserie when I was a student at Le Cordon Bleu, London.

There are more photos of cake replicas and two of Julie's design at The Independent.
Posted by JayV at 9:21 AM No comments:

UPDATED: HELENA COBBAN HAS SOME QUESTIONS

'I am still thinking hard about the U.S. decision-making during the time of the raid on Bin Laden's compound in Abbotabad. Was there really a firefight, or resistance? Though the compound had high walls as defenses, it did not seem to have many internal armaments, such as would be required in any serious "firefight" against a presumably very well-armed U.S. attack force. Bin Laden's concealment strategy seemed to be centered overwhelmingly around the approach of "hiding in plain sight" near a large Pakistani military cantonment; and that strategy would depend for its success on not attracting attention by hauling large amounts of weapons into the compound.

'Did the U.S. assailants indeed have a meaningful plan for "capture" and subsequent trial of their target? I hope so. But given the eagerness of the U.S. military to undertake extra-judicial executions against figures of far less renown and far less apparent culpability-- in Pakistan, Yemen, and elsewhere-- I have many serious doubts that they did.

'I hate the serious undermining of not only the letter of international law that EJE's represent, but also the undermining of the whole idea of the rule of law that they represent. Anonymous bureaucrats sitting in offices 10,000 miles away get to consider a compilation of "evidence" against a suspect that is ever tested in an open court and that may consist of large amounts of hearsay, malice from jealous opponents, and/or mistaken identity; and they get to say "Kill this one; don't kill that one; kill that one... "


UPDATE at 12:45 PM
Was it Bin Laden's double who was killed? The particulars about the death over the weekend keep changing.

The announcement by Obama is the third or fourth time we've learned of Bin Laden's death. I think he has been dead for years and the US just took him out of the icebox before the elections start to heat up.

If it's all true this time about the death of Bin Laden, Dennis Perrin's reaction is spot on.

For a Global Terrorist Mastermind, Osama bin Laden seemed fairly unproductive and quiet for the better part of a decade. If he was indeed the brains behind the 9/11 attacks, then he got in one lucky deadly shot at the infidels. Attacks like that are rare simply because they're nearly impossible to succeed. Calling bin Laden a Mastermind is hyperbole. It gives him too much credit. Of course, it does help keep powerless consumers afraid and prepped for vengeance. For this, large, inflated monsters are necessary.

I'm one of the producers of The Devil's Snuff. Watch it!

Labels: DeadFi, video
Newer Posts Older Posts Home
Subscribe to: Posts (Atom)
"So keep fightin' for freedom and justice, beloveds, but don't you forget to have fun doin' it. Lord, let your laughter ring forth. Be outrageous, ridicule the fraidy-cats, rejoice in all the oddities that freedom can produce. And when you get through kickin' ass and celebratin' the sheer joy of a good fight, be sure to tell those who come after how much fun it was." - Molly Ivins 1944-2007