The Haves need to get a grip

Four on line stories, one from the Daily Mail, one from a California radio station, and two from Guardian, reinforce the class divisions. This is just a sample.

In sunny California, paying for access with celebrity royals as citizens protest cuts. Most people will ignore the struggles, compartmentalize them as they prefer the diversion of polo and Pimm's; even if they don't (or cannot afford) to participate, they'll live it vicariously by reading about it.

The billion pound brand of William and Kate Inc
Next month’s US trip has already made millions for charity. The royal couple's potential earning power for Britain is immense, says Gordon Rayner

Crazy insanity of consumerism and crazy desperation to survive and obtain the good life: About 15 years ago my partner and I went to Las Vegas and had lunch at the Debby Reynolds casino and hotel (now defunct). There was a museum attached and I swear we saw the Monroe dress among the "antiquities."


Migrants run Mexican gauntlet to make leap of faith to US

And placed just under this story is

"‎It's starting to feel as though the Green Mountain State itself is a wholly-run subsidiary of the world's largest defense contractor."

Mayor Ki$$ has made his intentions clear about the Lockheed Martin deal. He's stopped listening to the citizens of Burlington.

Tomorrow Lockheed, Raytheon and other war profiteers will be meeting with a representative from Senator Leahy's office, the Vermont Deputy Secretary of Commerce, Brian Dubie and local business leaders to discuss how to develop Vermont's economy. Clearly this is an attempt to militarize Vermont's economy that could have far reaching impact. This is a sharp slap in the face to six months of inspired community organizing against Lockheed's incursion into Burlington and now... to determine Vermont's future.

Feel encourage to use costumes and large props, music and more to express your disgust at.

The event is billed as open to the public.

She said it with a straight face.

Labels: Africa, colonialism, irony, US imperialism, you can't make this stuff up

Factory farmed chickens are fed arsenic to make them grow faster. The FDA says that traces of the toxin are detectable in the meat. Tom Laskawy, writing in Grist:


It boggles my mind that the industry is so willing to risk consumer panic over this issue and wait for the media or government officials to force its hand. Instead of making smart business decisions and ending dangerous practices that might give consumers cause to avoid their product, they instead try to hold back the tide. One drug gets withdrawn while others remain. The FDA tests 100 chickens (as they did in this latest test), while millions are produced and sold every year.

It's no wonder that the so-called "ag-gag" bills remain popular among industrial farmers and their political lackeys. They can't seem to let go of consumer ignorance as a key business strategy. With arsenic in chicken, the FDA, the USDA, and the chicken industry seem to care far more about the perception of having acted rather than the reality of ensuring all chicken sold in the U.S. is free from this toxic substance. 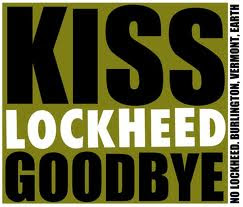 Mayor Bob Kiss is going ahead with the Lockheed Martin agreement with the city anyway.

At the Burlington Community Development and Neighborhood Revitalization Committee Meeting on Tuesday (6/7/11), the head of Burlington's Economic Development Office showed clearly that the mayor is in violation of City Council's February resolution about municipal public-private partnerships and the Lockheed Martin agreement.

The Lockheed discussion begins at the 9:20 mark in the video below. At 41:35, CEDO Director Larry Kupferman refers to Burlington being in a "partnership" with Lockheed.

In response, Councilor Mulvaney-Stanak, at the 53:20 mark, is just too, too nice.


"Given the attention on this issue I'd hoped things would be a little more public, or at least the Council would be informed about discussions that were still happening with Lockheed in any sort ...of public way. [...] I think given the interest the public has shown on this it would have been nice if the Mayor had, and nice is not even the appropriate word, it would have been I think more appropriate for the Mayor to mention it in the public comments or have something that go out, so people have a chance to weigh in. Knowing that this process [drafting community standards] is still going on."

The video from Tuesday is up on Vermont's two biggest political blogs. - Green Mountain Daily & VTDigger.org

The New Scramble for Africa

Colonialism is alive and well among US academic institutions. Helpful Humanitarian intervention? No way, Zaid! Africa needs another revolutionary like Basil Davidson to blast this western hypocrisy to smithereens.

"No one should believe that these investors are there to feed starving Africans, create jobs or improve food security," said Obang Metho of Solidarity Movement for New Ethiopia. "These agreements – many of which could be in place for 99 years – do not mean progress for local people and will not lead to food in their stomachs. These deals lead only to dollars in the pockets of corrupt leaders and foreign investors."

"The scale of the land deals being struck is shocking", said Mittal. "The conversion of African small farms and forests into a natural-asset-based, high-return investment strategy can drive up food prices and increase the risks of climate change.

If only the Burlington (VT) city council would have the balls to decide yea or nay (and show some responsibility as elected city officers). Two councilor-appointed city commissions have recommended the removal of fluoride in the city's water supply (Board of Health and Public Works commission), and the council takes no action! It's been more than 5 years that the council have been kicking this around. Get with it, already!

And not surprisingly, Ralph Nader has called for a national debate on mandatory water fluoridation.
Posted by JayV at 10:23 AM No comments:

‎61 cents an hour was too much

Two years ago, Haiti unanimously passed a law sharply raising its minimum wage to 61 cents an hour. That doesn’t sound like much (and it isn’t), but it was two and a half times the then-minimum of 24 cents an hour.

This infuriated American corporations like Hanes and Levi Strauss that pay Haitians slave wages to sew their clothes. They said they would only fork over a seven-cent-an-hour increase, and they got the State Department involved. The U.S. ambassador put pressure on Haiti’s president, who duly carved out a $3 a day minimum wage for textile companies (the U.S. minimum wage, which itself is very low, works out to $58 a day).


It's called humanitarian intervention and the US State Department is an expert, right?
Posted by JayV at 9:49 PM No comments:

In mid-May there was a surprise on my blog. I found it immediately redirected to another website, an annoying spam sales site. Not being a geeky person, I was stymied - first thinking it was a problem with my computer. But others told me that it was happening to them when they clicked my blog url. So I checked Blogger help - others were having the same problem, and after some trial and error clicks, I found it was a gadget or a widget that causing it. So I removed it. Bingo! I swear that either Blogger was hacked or, more likely, they cause the problem themselves. Because I certainly didn't put the widget in my blog. I may move to WordPress, as some of my friend bloggers are using that program.
Posted by JayV at 9:43 PM No comments:

Labels: blogs
Newer Posts Older Posts Home
Subscribe to: Posts (Atom)
"So keep fightin' for freedom and justice, beloveds, but don't you forget to have fun doin' it. Lord, let your laughter ring forth. Be outrageous, ridicule the fraidy-cats, rejoice in all the oddities that freedom can produce. And when you get through kickin' ass and celebratin' the sheer joy of a good fight, be sure to tell those who come after how much fun it was." - Molly Ivins 1944-2007