March 25, 2011 is the 100th anniversary of the Triangle Shirtwaist Factory fire, deadliest industrial disaster in the history of the city of New York.


Many of the Triangle factory workers were women, some as young as 14 years old. They were, for the most part, recent Italian and European Jewish immigrants who had come to the United States with their families to seek a better life. Instead, they faced lives of grinding poverty and horrifying working conditions. As recent immigrants struggling with a new language and culture, the working poor were ready victims for the factory owners. For these workers, speaking out could end with the loss of desperately needed jobs, a prospect that forced them to endure personal indignities and severe exploitation. Some turned to labor unions to speak for them; many more struggled alone. The Triangle Factory was a non-union shop, although some of its workers had joined the International Ladies' Garment Workers' Union.

Doug Blanchard of Counterlight's Peculiars has a thoughtful post up with a series of photos. He writes,

As the right to bargain collectively is being effectively repealed in the United States, the memory of the Triangle Fire takes on a new dimension of meaning and pathos. Frances Perkins, the first Secretary of Labor, and a witness to the fire, always said that the New Deal began in the Triangle Fire. This catastrophe propelled the organization of wage earners for their safety as well as for better wages. Political leadership in New York City and state began taking a serious look at the issue of worker safety in the workplace for the first time.

All that was fought for in the fire's wake is now under threat of repeal. We forget that so many things that we take for granted in our jobs, like our safety in the workplace and workman's comp, were not the free gift of benevolent corporate autocrats, but had to be fought for over decades, and sometimes after terrible disasters like the Triangle Fire.

Democracy Now! has devoted today's broadcast to the fire and its impact on labor relations today.
Posted by JayV at 9:03 AM No comments:

Such a tumultuous life: one of the greatest icons of the Golden Era of Hollywood has died. The Guardian has a thoughtful obituary with other links. I liked her in Giant, Butterfield 8, Cat on a Hot Tin Roof and Who’s Afraid of Virginia Woolf? And in Taming of the Shrew, she did Shakespeare proud. (Time to check the local library's movie collection.)
Posted by JayV at 10:53 AM No comments:

Richard Estes/American Leftist yesterday had commentary and news links on the quake and aftermath, but also added a rather telling (ironic) comment at the bottom of his post,


On a more mundane note, the New York Times can't resist exploiting the situation as an opportunity to cast the US military presence in Japan, disliked by many people there, in a favorable light. The US military is, after all, first and foremost, a humanitarian institution.

Hugh Martin, who wrote the music for the 1944 film "Meet Me in St Louis," has died at aged 96. In the movie were such classics as "The Trolley Song," "Have Yourself a Merry Little Christmas" and "The Boy Next Door." Here's his Playbill obituary.

A RESPONSE TO TODAY'S DEVASTATING EARTHQUAKE IN JAPAN

Tonight we heard Marketplace's litany, "Let's do the numbers": "The earthquake didn't rattle the investors." That's a relief for NPR/VPR's listeners.
Posted by JayV at 7:23 PM No comments:

This is not satire from The Onion.

This is for real from Reuters

"Members of a new Texas association are starting a college scholarship program for a group of students they say do not have as many scholarship options as others -- white men. Colby Bohannan, a student at Texas State University in San Marcos, and some friends have formed the non-profit Former Majority Association for Equality, which will provide the scholarships."

"... tens of thousands of workers and their supporters have flooded the Wisconsin and Ohio state capitols, pushing back on their newly-elected Republican Governors' attempts to revoke collective bargaining rights for public workers.

Other than the flashes of anger Ohio crowds showed when they were curiously shut out of their statehouse, the protests have been entirely peaceful, even jovial, with the Wisconsin capitol having an atmosphere similar to a pep rally..."

From New Left Media, the video below shows the struggle to be optimistic, even in reactionary times. 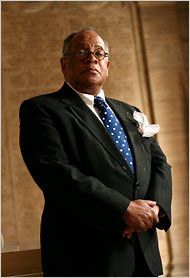 I know people have first learned about Peter Gomes from his writings, particularly The Good Book. I first heard him preach at St Stephen's, Houston many years ago. His life was proof positive that we can become the people we were meant to be. There have been struggles, but aren't we fortunate to have had Mr Gomes to help us carry on?

Labels: obits, people with soul, peter gomes
Newer Posts Older Posts Home
Subscribe to: Posts (Atom)
"So keep fightin' for freedom and justice, beloveds, but don't you forget to have fun doin' it. Lord, let your laughter ring forth. Be outrageous, ridicule the fraidy-cats, rejoice in all the oddities that freedom can produce. And when you get through kickin' ass and celebratin' the sheer joy of a good fight, be sure to tell those who come after how much fun it was." - Molly Ivins 1944-2007