Finally a backlash against urban hipster foodies? I've training and a certificate in patisserie from Le Cordon Bleu. My brother is a professional chef. I abhor the elitist food trends just to make a buck. So I appreciate the seriousness (and humor) of this article from Slate: The Great GoogaMooga and elitism: What Brooklyn’s food festival says about foodies. Quotes:

"So much of the festival seemed designed to congratulate those self-satisfied consumers who act like they deserve a Congressional Medal of Honor for spending $10 on a bratwurst. ... a crowd gathered to watch celebrity chef April Bloomfield butcher a pig, as if she were Hemingway diagramming a sentence."

‎"The trend toward locally, ethically sourced ingredients prepared thoughtfully is a good one... But foodies’ focus on ingredient and chef pedigree has morphed into an aesthetic cult for the wealthy, in which status trumps sustainability."

Now, go devour your breakfast pain au chocolat.
Posted by JayV at 10:09 AM No comments:

Skateboarders use their boards as signs in Montréal. 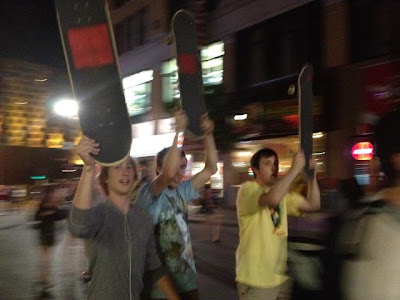 Photo courtesy of Tim Cast, whose live stream from Montréal you can watch here.
Live streaming by Ustream
Posted by JayV at 10:02 AM No comments:

Per Juliet Buck, blogger and activist (via Facebook): "South Burlington City Council just voted AGAINST basing the F-35 in Burlington by a vote of 4-1!!!!!!!!!! So this is what winning one feels like?"A victory indeed. Juliet and the other activists have struck a blow against the evil jets of Lockheed Martin. The Feds, of course, can do whatever they want, but after years of propaganda and misinformation, the victory is that four city officials said NO!
Posted by JayV at 9:17 PM No comments: 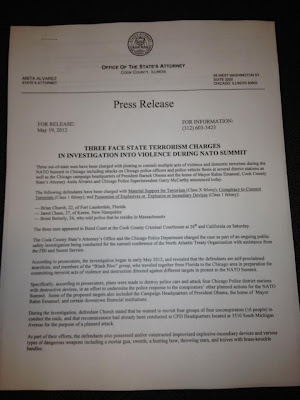 But one thing we do know for sure. They are lucky..............once the NDAA is in effect there'll be no bond, no habeas corpus rights, no nada. But, the so called Patriot Act took care of most of their Constitutional rights already. Why do you think 9/11 occurred?
Posted by JayV at 4:14 PM No comments:

Are You Smarter Than a Fifth Grader? 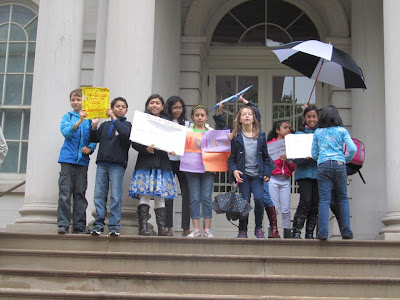 These PS 122 5th graders from Astoria, Queens chose to study fluoridation as a class research project. At a rally with Queens councilor Peter Vallone in Manhattan last Tuesday, they urged the New York City Council to stop endangering their health by adding fluoride chemicals into their bodies via the water supply. (See this link with video.) No one asked them, they said. Any legislator who claims they can't understand fluoridation isn't as smart as a fifth grader who does her homework!
Posted by JayV at 4:05 PM No comments:

Nine Tons and What Do You Get?

A Mayan temple built from 9 tons of chocolate, that's what. The small white and dark chocolate Alpine village that our Superior class at Le Cordon Bleu made in our course work was nothing compared to this monument! From designboom:

quinza [sic] specialty foods has created the world's largest chocolate sculpture: a replica ancient mayan temple weighing 18,239 pounds.... the chocolate temple will be on display at the quinza institute of chocolate and pastry in irvine, california, USA from june 4th until the date of december 21st, 2012 upon which the mayan calendar ends and the massive dessert sculpture will be destroyed.

More, with photos at QZNA.COM.Image © qzna specialty foods.
Posted by JayV at 9:29 AM No comments:

What heppened to this couple is an embarrassment to the city.


"We want to control our own food as much as we can," says Rooney, who lives on South Willard Street near Champlain College. "Sustainable living. We live in Vermont. Grow your own food. All that stuff —– we believe in all of it."

But last month, the couple got a notice from the Burlington Code Enforcement Office that their gardening structures were a code violation and would have to come down to avoid penalties. The code office received anonymous complaints — three of them — about the homemade hoop houses.

Rooney says he was told that, under city zoning regulations, hoop houses qualify as "stable structures" and that the couple's raised garden beds qualify as "retaining walls" — both of which require permits from city hall. So does a two-foot-high metal fence that lines the garden to keep out hungry rabbits.

"This is ridiculous," Rooney says on a recent spring day.

Rooney and Dorn are master gardeners, certified through classes at the University of Vermont Extension School and hours of apprenticing. Their front yard on South Willard Street, a well-heeled part of town with stately colonial homes, has been turned into an urban gardener's paradise — with bountiful gardens, peach, apple and pear trees, and strawberry beds alongside the steps that lead up a slope to their front door.

But to at least one neighbor, the hoop houses are an out-of-place eyesore. Rooney says he doesn't know who made the complaint. He called one neighbor to inquire about it, but says he never heard back.

Urban agriculture is alive and well in the Intervale, why not allow it in other neighborhoods? City council, are you listening? As a friend remarked after reading this story, "What a great example for others in a tight economy: grow your own healthy food! Beat the high cost of quality nutrition! Find your own solutions, in a cold climate!"
Posted by JayV at 10:00 AM No comments:

Now comes Obama, saying precisely what Cheney said, only this time the heavens parted, earth trembled, the cosmos aligned in a more progressive direction. It didn't matter that this was Obama's personal, not political, opinion. Nor was the fact that Obama leaves gay marriage to the states particularly troubling. Indeed, facts meant relatively nothing to the faithful. It was all about feeling, projection, wishful thinking. In other words, nothing's changed. As with everything he says, Obama's statement was calculated. He conferred with pollsters, advisers, and handlers before taking the Cheney step, knowing full well that his liberal base would come crawling. (You have to love the bit about consulting his "neighbors," as if he was weeding the backyard and struck up a gay marriage conversation with the woman next door while she hanged her laundry to dry.)

Now, you might point to Obama's murderous foreign policies, his expansion and strengthening of the surveillance state, his aggressive support for the Drug War, his coddling of corporate power, etc., and wonder how his gay marriage stance mitigates all that. Well, it doesn't. As recent polls have shown, a large percentage of liberals support many of Obama's horrid positions, particularly his increased use of drones (which are coming to a city near you). Obama's reelection image is Warrior President, tougher than Romney, ballsier than the entire GOP. Mix in some pseudo-populist rhetoric, rail against the very corporate forces that keep him in power, play the gay marriage hand right down the middle, and a second term is all but inevitable.

The sun is shining and we're getting back to one of the things which makes this movement so amazing, occupying public space, with outdoor General Assemblies in City Hall Park!New and Important: GA's are moving to Saturdays 12 Noon to 1:30 P.M., immediately after the bank picket (in front of Citizen's Bank, the recipient of the biggest amount of bailout money) and coinciding with the Farmers Market so as to facilitate maximum turnout. Facebook link
Posted by JayV at 6:52 PM No comments:

On This Day: "Oh, the humanity and all the passengers screaming around here."

On May 6, 1937 in Lakehurst, New Jersey. the German passenger airship LZ 129 Hindenburg caught fire and was destroyed during its landing. That voice on the audio and video reports has haunted me since the first time I heard radio reporter, Herbert Morrison, describe the accident. 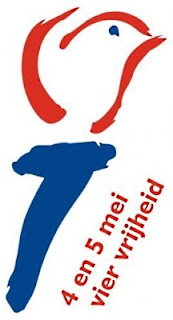 Today is also my birthday (OLVG, A'dam, 5 mei 1948). This morning I drank coffee from a special commemorative mug, a gift I received in 1995 from my cousin Marianne: "50 Jaar Bevrijd! 5 mei 1995". Nothing could be better.Tonight HM will attend the annual open air concert in Amsterdam which thousands of people enjoy too, sitting in their boats or standing along the Amsterdam canals (as well as it will be broadcasted, of course).Here is the link to the official site of the 4 & 5 May Committee. It's a shame it's not in English; though there is a small note telling us that a translation is coming, today it is a bit late for that! In 1995 when I was in Arnhem for a liberation concert, there were thousands of Canadians in the country, veterans of Liberation. So it wouldn't have been a bad idea to have a French translation, too.
Posted by JayV at 6:45 AM No comments:

During the Occupation, thousands of Amsterdam Jews were herded into cattle trucks. Destination: Westerbork. Final destination: concentration camps. Would you walk the Amsterdam-Westerbork trail?

“The people sheltering me had made a hiding place in a big cupboard. I ran there. My foster mother put a plank with clothes on top. Then I heard men in heavy boots coming up the stairs. I thought I’d get a bayonet through me any second. I was amazed when they left again.” Edith herself managed to escape the train journey. Over 60 of her relatives, though, and her mother and half-brother were taken to Westerbork and later were killed in Auschwitz or Sobibor. “My mother was taken to Auschwitz on the last train… bitter, very bitter,” she says.

Last night at the Dam Square, Amsterdam. Dodenherdenking|Remembrance Day ceremonies to remember all n the Kingdom who have died in wars and peacekeeping missions since the beginning of the Second World War. HM Queen Beatrix and TRH The Prince of Orange and Princess Maxima attended the solemn ceremony at Dam Square/Amsterdam. And as I have every year, I observed the silence at 8:00 pm, too. It's quite a moving ceremony in the Dam Square. I can recall it, too, especially when I was younger, visiting relatives.
Posted by JayV at 6:27 AM No comments:

Labels: Amsterdam, dodenherdenking, Netherlands, remembrance day, WWII
Newer Posts Older Posts Home
Subscribe to: Posts (Atom)
"So keep fightin' for freedom and justice, beloveds, but don't you forget to have fun doin' it. Lord, let your laughter ring forth. Be outrageous, ridicule the fraidy-cats, rejoice in all the oddities that freedom can produce. And when you get through kickin' ass and celebratin' the sheer joy of a good fight, be sure to tell those who come after how much fun it was." - Molly Ivins 1944-2007