A Happy New Year gift from Barack Obama - he gives Americans and civil liberties the shaft by signing the NDAA just passed by our congress. (No surprise, it just codifies what he was doing anyway - indefinite detention of terrorist suspects.) However, with this signing, Americans can say good-bye to half the Bill of Rights. Amendments 4-9 have been nullified. If he had reservations, why the fuck did he sign it? .
Posted by JayV at 6:37 PM No comments:

‎WASHINGTON POST (AKA stenographer for the Administration and the DoD):‎"The Obama administration on Thursday hailed a new $30 billion arms deal with Saudi Arabia as both a hedge against Iranian aggression in the Persian Gulf and an economic windfall that could create thousands of U.S. jobs over the next decade."
Posted by JayV at 10:56 AM No comments:

The Flushing Remonstrance was signed on 27 December 1657 in Flushing, New Netherland (now Flushing, Queens). At the time, there as an established church, the Dutch Reformed Church (Nederlandse Hervormde Kerk) in the Netherlands and that expression of Christianity was the only one allowed in the Dutch colonies. A group of residents, none of them members of the Society of Friends, petioned Director-General of New Netherland Peter Stuyvesant to request an exemption to his ban on Quaker worship. This document paved the way for the Bill of Rights, many years later.
Posted by JayV at 10:21 AM No comments:

All I can say is, welcome back, guys.

Have the Occupy Wall Street protests that sprung up across the country this fall already passed? Shot in NYC, Oakland, and Cincinnati, this short explores the state of the #OWS protests now that local governments have removed permanent encampments, and asks what the future will be for this still-young nationwide movement.

Édith Giovanna Gassion was born on December 19, 1915 in Belleville, Paris, France. She is, of course, better known as Édith Piaf. I love all of her songs, but this one is my particular favourite - if I'm in a singing mood in the shower, I have been known to belt out this one.
Posted by JayV at 9:49 AM No comments:

Labels: anniversaries, on this day, people with soul, piaf

It's up to the activists now

A report about COP17 in Durban, South Africa.
Posted by JayV at 9:32 AM No comments:

France24: Singer Cesaria Evora, nicknamed "the barefoot diva," died in her native Cape Verde on Saturday, three months after retiring due to ill health, the country's culture minister has announced.
Posted by JayV at 1:53 PM No comments:

The Dutch ambassador to Indonesia has formally apologised on behalf of the Netherlands’ government for the 1947 massacre in a village on Java island, in an emotional ceremony on the anniversary of the executions.

"In this context and on behalf of the Dutch government, I apologise for the tragedy that took place in Rawagede on the 9 December 1947," the Netherlands' ambassador to Indonesia, Tjeerd de Zwaan, said

He then repeated the apology in the Indonesian language, to the applause of hundreds of people attending the ceremony, some of whom broke down in tears as they listened in front of a marble monument commemorating the dead

The number of victims has always a point of dispute between the Dutch and the Indonesians. Dutch officials claim some 150 people were killed, but a support group and the local community allege the death toll was 431.

Men and boys executed
During Indonesia’s fight for independence between 1945 and 1949 - in what became known as the Indonesian National Revolution - Dutch troops swooped into the village of Rawagede and executed its men and boys as their families and neighbours looked on.

In a landmark ruling last September, a civil court in The Hague found the Dutch state responsible for the executions and ruled in favour of eight widows and a survivor of the massacre who lodged the case. Two of the widows have since died, and so has the survivor, Saih Bin Sakam, who passed away in May at the age of 88

The Netherlands agreed to pay 850,000 euros to the community before the court's decision, and will now pay an additional 180,000 euros in compensation to the plaintiffs or their families.

Although the Dutch government in the past expressed "deep regret" over the conduct of some of its troops in pre-independence Indonesia, it had never formally apologised for any excesses, including the massacre at Rawagede.

The Hague court rejected the Dutch argument that no claim could be lodged because of a five-year expiry in the statute of limitations, saying it was "unacceptable".

“We will never forget that day”
Some 60 schoolgirls in white Islamic headscarves opened the ceremony with the Indonesian national anthem. They then presented a spoken word performance describing the pain the community has felt since the killings.

"We will never forget that day in Rawagede," the lead performer screamed. "We will remember forever in an independent Indonesia."

Dutch embassy officials presented the widows with a wooden plaque with a windmill carved on the left and a palm tree on the right, with the words "Finally justice for the people of Rawagede" and the date of the court ruling inscribed on the plague.


See my previous posts about Rawagede.
Posted by JayV at 4:05 PM No comments:

A lovely poem by Christina Georgina Rossetti, who was born 5 December 1830 in London.  I've not read Victorian poetry since I was at university.  I still have my old textbook from the class;   maybe I can delve into it this winter!

REMEMBER me when I am gone away
Gone far away into the silent land;
When you can no more hold me by the hand,
Nor I half turn to go, yet turning stay.
Remember me when no more day by day
You tell me of our future that you plann'd:
Only remember me; you understand
It will be late to counsel then or pray.
Yet if you should forget me for a while
And afterwards remember, do not grieve:
For if the darkness and corruption leave
A vestige of the thoughts that once I had,
Better by far you should forget and smile
Than that you should remember and be sad.

NOT YOUR STEREOTYPICAL SUNDAY DRIVERS

The headline this morning careens across the Yahoo! homepage, Fleet of Ferraris ruined in Japan sportscar pileup

What an example of the One Percenters' obsession with instant gratification and possessions and the sensationalism of consumerism news.  Shocker!  That the loss Italian sportscars worth a lot of dosh is the tragedy in this story.  Only in the seventh, next to the last, paragraph do we learn that no one died and people were "treated for bruises and cuts."
Posted by JayV at 8:31 AM No comments: 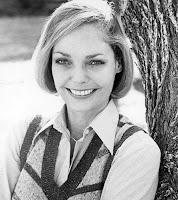 As a sixteen year old on my way to meet my aunt after her gym class, Judy Lewis and I shared an elevator in a building on W 57 St, NYC. I knew her from The Secret Storm, a daytime soap, but only realised who she was after she got off - missing my chance for an autograph. I was too gawky and shy anyway - wouldn't have approached her for one if I had known. I just thought she was beautiful, though, and mentioned to my aunt later that I thought I'd just seen Judy Lewis. "Yes, she's in my class sometimes," my aunt told me. I had no idea then that her mother was Loretta Young and her father was Clark Gable. I just knew her from television. I learned of her Hollywood life and her successful career outside of theatre much later; But what a sad life she had as the daughter of Hollywood icons! Judy Lewis was seventy-six years old when she died on November 25 at her home in Pennsylvania.UPDATED: I just found this video tribute by her brothers.Judy Lewis's publicity shot above was taken around 1977 (courtesy of the New York Times, via Photofest).
Posted by JayV at 8:20 PM No comments:

Labels: actors, obituaries, television
Newer Posts Older Posts Home
Subscribe to: Posts (Atom)
"So keep fightin' for freedom and justice, beloveds, but don't you forget to have fun doin' it. Lord, let your laughter ring forth. Be outrageous, ridicule the fraidy-cats, rejoice in all the oddities that freedom can produce. And when you get through kickin' ass and celebratin' the sheer joy of a good fight, be sure to tell those who come after how much fun it was." - Molly Ivins 1944-2007