Zinn Education Project:One June 21, 1964, James Chaney, Michael Schwerner, and Andrew Goodman were murdered by the KKK with help from the deputy sheriff near Philadelphia in Neshoba County, Miss. While their case received national attention, there were many more people murdered while seeking basic democratic and human rights. Learn more about the history of the Civil Rights Movement in Mississippi: http://bit.ly/14NLcaz Also, listen to the Democracy Now! broadcast: "After Over Four Decades, Justice Still Eludes Family of 3 Civil Rights Workers Slain in Mississippi Burning Killings" http://bit.ly/LFXWZc
Posted by JayV at 8:13 PM No comments:

BoA Whistleblowers Bombshell: "We were told to lie."

"Senior managers provided carrots and sticks for employees to lie to customers and push them into foreclosure. Simone Gordon described meetings where managers created quotas for lower-level employees, and a bonus system for reaching those quotas...Employees were closely monitored, and those who didn’t meet quotas, or who dared to give borrowers accurate information, were fired, as was anyone who 'questioned the ethics … of declining loan modifications for false and fraudulent reasons,' according to William Wilson." ~David Dayen
Posted by JayV at 8:04 PM No comments:

Thanks to Undernews for the reminder. "That capability at any time could be turned around on the American people and no American would have any privacy left, such is the capability to monitor everything. Telephone conversations, telegrams, it doesn't matter. There would be no place to hide. If this government ever became a tyranny, if a dictator ever took charge in this country, the technological capacity that the intelligence community has given the government could enable it to impose total tyranny, and there would be no way to fight back, because the most careful effort to combine together in resistance to the government, no matter how privately it was done, is within the reach of the government to know. Such is the capability of this technology. I don't want to see this country ever go across the bridge. I know the capability that is there to make tyranny total in America, and we must see to it that this agency and all agencies that possess this technology operate within the law and under proper supervision, so that we never cross over that abyss. That is the abyss from which there is no return." - Senator Frank Church, 1975
Posted by JayV at 10:04 AM No comments:

"The pathology of the Power Complex expresses itself publicly in two forms: magnification and mummification. As with the colossal statues that dominated the palaces of ancient Egypt and Babylonia, the same effect is produced for the more ephemeral absolute rulers of our own time in blown-up photographs, while by radio, television, and telephoto the image of Big Brother, by sheer repetition and multiplication, becomes inescapable. But the end product of this fraudulent inflation is a mummy: a corpse preserved in Egyptian fashion, placed in a tomb for public worship." ~from The Pentagon of Power, by Lewis Mumford Though used bookstores will occasionally carry Mumford in their stocks, sadly many people nowadays don't know him or read him. Which is not surprising, given the short memories of the chattering nabobs of either end of the political spectrum.
Posted by JayV at 9:47 AM No comments:

ON THIS DAY: JOHN BOSWELL

"It is possible to change ecclesiastical attitudes toward gay people and their sexuality because the objections to homosexuality are not biblical, they are not consistent, they are not part of Jesus' teaching; and they are not even fundamentally Christian." - John Boswell Historian John Eastburn Boswell was born 20 March 1947 in Boston, Massachusetts. He published 4 books, including Christianity, Social Tolerance, and Homosexuality (1980). Boswell died of complications from AIDS when he was only 47 years old.I remember hearing him speak, either at a Integrity/Houston convention or at Autry House, Houston. Well all I can say is praise be. What a gift John Boswell is in his writings that live on.
Posted by JayV at 10:11 AM No comments:

Rape in the News

"Reporters viewing rape from the point of view of the rapists is a longstanding problem in corporate media." ~FAIRIt's been a persistent problem at the NYT.Then there's the internal sexism at CNN in its reporting of the guilty verdict at the trial of the Steubenville, Pennsylvania high school football players. 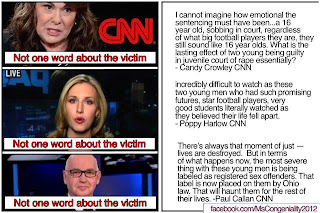 ‎"How is it that a 15-year-old in Newark who the country labels worthless to the economy, who has no hope of getting a job or affording college, can suddenly generate $20,000 to $30,000 a year once trapped in the criminal justice system? The expansion of prisons, parole, probation, the court and police systems has resulted in an enormous bureaucracy which has been a boon to everyone from architects to food vendors—all with one thing in common, a paycheck earned by keeping human beings in cages. The criminalization of poverty is a lucrative business, and we have replaced the social safety net with a dragnet." -- Chris Hedges in Truthdig.Join a statewide movement of Vermonters organising to pass a historic law banning private prisons: https://www.facebook.com/BanPrivatePrisonsVermont
Posted by JayV at 9:11 AM No comments:

This is Fucked Up. The State of Vermont is launching drones while debating cutting fuel assistance to seniors.


What can ordinary Vermonters do about this?

The Legislature makes the laws, laws that, according to the US Constitution, supersede federal laws.  But not many folks understand this.  So when  Vermont has been pressured to yield up major assets; e.g. our Vermont Guard to the Afghanistan Occupation, our hydroelectric dams to TransCanada and our surface water to Entergy and our groundwater to bottling companies, it is fashionable to blame the governor, especially if the governor is a Republican.

But it is the Legislature who willingly maintain the tax-free status of the entities named above and others.

Hold them accountable.  Demand to know why, demand that they act according to the wishes of their constituents. Vote them out of office!

In reality it is the Legislature that allows, forbids, funds, tolerates, or looks the other way.  An agency carries out policy.  An agency may not make policy.

Vermonters can’t do anything about Monsanto’s control over the USDA and their $149 billion budget, run by a Monsanto insider and lobbyist.  We can’t affect UN’s Agenda 21.  That part of US sovereignty has recently been ceded.  Congress, unless the incumbents are replaced, will continue to pursue an agenda which has nothing to do with the interests of their constituents, no matter who is elected president.

This, domestic surveillance in Vermont, we can do something about.

Anniversary of the 'Watersnoodramp" - the Dutch 9/11

"For those who went through the Watersnoodramp [the 1953 flood disaster in The Netherlands] it was the biggest shock of their lives, perhaps an even bigger shock than living through World War II had been. That disaster after all was manmade, with convenient villains and which could be easily remade into a self flattering narrative of a plucky little country standing up to the might of the efficient, ruthless nazi hordes. But to be overwhelmed by nature, by the old enemy, the sea, the enemy we were supposed to have tamed and bound our will, suddenly showing just how fragile our defences really were: that shocked us to the core, that hit us in the national psyche."Read all about it at Wis[s]e Words - and what happened after the watersnoodramp.
Posted by JayV at 10:28 AM No comments:

Hillary Clinton has given her farewell speech; she is to be replaced by another warmongering imperialist. Good riddance.The one thing Hillary did do and Obama admitted, is try to keep his image as well as empire's intact abroad. The world expected something different than what they got. Just as her husband compartmentalized his (sex) life, Hillary talked the peace talk and acted as arbitrator in world conflicts - but she promoted business with warmongers; Lockheed Martin, for one - the maker of F35's, the death machines that the governor, mayor, congressman and senators want to come to BTV. There's a wonderful blog, Undernews, I've read for years. The blogger owner lived right in the midst of the DC scene for years, but now has retired to Maine. He's collected quite a dossier on the ex-Madam Secretary and her sleazeball husband. Take some time and look here.
Posted by JayV at 9:45 PM No comments:

‎"If there's one thing we can all agree on: We want to end the violence that breaks all our hearts." - Sen. Patrick Leahy, a dek quote on the front page of today's Burlington Free Press. He was not talking about the Children Killed by American Drones.
Posted by JayV at 10:16 AM No comments:

Labels: children, Democrats, drones, guns, politics, violence
Newer Posts Older Posts Home
Subscribe to: Posts (Atom)
"So keep fightin' for freedom and justice, beloveds, but don't you forget to have fun doin' it. Lord, let your laughter ring forth. Be outrageous, ridicule the fraidy-cats, rejoice in all the oddities that freedom can produce. And when you get through kickin' ass and celebratin' the sheer joy of a good fight, be sure to tell those who come after how much fun it was." - Molly Ivins 1944-2007