UPDATE: The press conference made it to WCAX-TV Channel 3:

Green Democratic Alliance says the pricetag is too steep. They want the building torn down. The group says so-called "smart demolition" -- where materials are salvaged and recycled -- would cost the city less than $2.5 million. The space could then be left open, kept green, and transformed into a multi-use public park with community gardens, the Moran Sculpture, and a sailing center.

John Briggs wrote a short article for the Free Press.

Burlington voters will have a clear choice March 4 about what to do with the Moran plant.
---
“Our ballot question is straightforward,” [Owen] Mulligan [Director of Green Democratic Alliance] said. “We can get a clear answer. I look forward to the results.”

Look for an expanded Briggs article in tomorrow's edition.

Green Democratic Alliance held its first ever press conference today, to announce that the required signatures were received and certified by Burlington's clerk-treasurer's office. Since the mid-2007, citizen volunteers have been to every neighborhood and ward in the city collecting the signatures of resident voters. Just over the required 1,340 signatures were collected.

Owen Mulligan, Jessica Tanner, and I were the GDA spokespersons at the press conference to regarding the Moran Plant campaign at 10:30 a.m., and Channels 3, 5, 17, the Burlington Free Press and other media showed up!! Look tomorrow in Seven Days for an extensive article by Ken Picard about our campaign.


Also, at the press conference, I announced that the Moran Sculpture will be the symbol of the effort 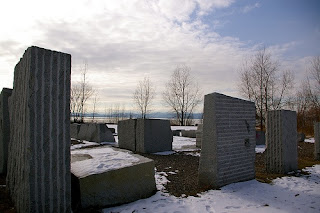 to keep the Waterfront Park accessible and green!
Posted by JayV at 1:36 PM