The Houston Voice has been given the axe. The paper had been around since the mid 1970s, and I read it regularly when I lived in Montrose. Apparently the paper had been in trouble for quite some time.

The chain that publishes the Houston Voice and other gay-community papers nationwide -- including the venerable Washington Blade -- has gone kaput.

Gawker and other media are reporting that Window Media, the financially strapped company that owns more gay news titles than any other chain, has shut everything down.

The Houston Voice website now gives you an error message, and the phone "is no longer in service." 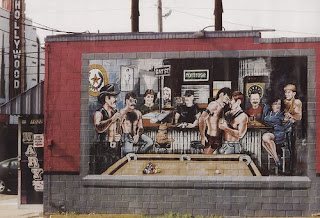 Oh Mary! The venerable Mary's Lounge at Westheimer and Montrose has closed! I could tell you stories!

Mary's, the bar that many people think of as the gay bar in Houston history, is no more, a victim of unpaid rent.

But there's a scramble going on to try to keep as much of the place as possible, as a way to preserve a cornerstone of Houston's gay past.

A Facebook page has been set up to encourage ways to get artifacts from the 40-year-old place.

"The old sign with Ronald Reagan smoking that hung in the bathroom?" writes one commenter. "The old 'Mary's' sign that hung outside the building on the patio? What about any of the artifacts stored in the back building? Or some of the items from the back patio, like the motorcycle and statue?"

Tim Brookover, an activist in the gay community, is urging the GLBT Community Center board to get active in saving whatever can be saved. "Mary's contains a number of objects and artifacts that are significant to gay, lesbian, bisexual and transgender heritage," he says. "Our ad hoc Mary's heritage group, spearheaded by the GLBT Community Center, is seeking to get access to Mary's and, we hope, permission to remove at least some of the items. At the very least, we hope to document what is left with photography."

If those walls could speak...

Photo of Mary's mural (now gone) by eatcorndie on Flickr.
Posted by JayV at 8:57 AM