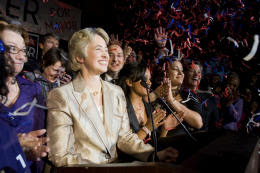 '“I promise to give to citizens an administration of honesty, integrity and transparency,” she said. “The only special interest will be the public. We are in this together. We rise or fall together.”' - Annise Parker

I lived in Houston for over 20 years and voted for Annise Parker when she ran for city council. She got her start in civic activism in Houston's Neartown, which includes Montrose - where I lived. She's now the first lesbian elected mayor of a major American city!

From the Houston Chronicle:

When Parker finally appeared at 10:30 p.m., resplendent in a gold pantsuit and pearl necklace, the room at the George R. Brown Convention Center jammed elbow-to-elbow with supporters erupted with a deafening cheer. Some were newcomers to political waters. Some had been with her a dozen years ago when she claimed her first City Council seat.

“Tonight the voters of Houston have opened the doors to history,” she said. “I acknowledge that. I embrace that. I know what this win means to many of us who thought we could never achieve high office. I know what it means. I understand, because I feel it, too. But now, from this moment, let us join as one community. We are united in one goal in making this city the city that it can be, should be, might be, will be.”

She was interviewed by NPR's Melissa Block:

BLOCK: You said on election night that you hope your election will change people's minds about Houston. What do you think needs to be changed in people's mind?

Ms. PARKER: A lot of Americans have an image of Houston as a, perhaps, stuffy, conservative, southern city. We are a huge, sophisticated, international city. We are one of the most diverse cities in America. And we clearly value people more on what they can do than who they are. I do believe that my election will cause people to give Houston a second look as a place where they might want to live and work.

Right on. Houston's come a long way indeed. I do look forward to the day when electing an lbgt person to higher office (in civic life or in religious institutions) will not be a big deal. But there's work still to be done!
Posted by JayV at 8:14 PM