The Death of a Dutch Minister of State: H.A.F.M.O. (Hans) van Mierlo

From the obituary in NRC/international

He himself has now become part of history. Henricus Antonius Franciscus Maria Oliva van Mierlo -- or Hafmo, as his party members affectionately referred to him -- was a philosopher, a bohemian, a romantic, an orator, a bon vivant, a master of paradox, an eternal doubter and yes, of course, also a politician.

Above anything else, he was the political embodiment of the Dutch cultural revolution of the 1960s. The movement that never really became a revolution, because the Netherlands was a country where so-called 'repressive tolerance' quickly made D66 and Van Mierlo himself a part of the system they so maligned. Van Mierlo, who started out a critic of the state, died an honorary Minister of State. He himself would undoubtedly have appreciated the paradox. 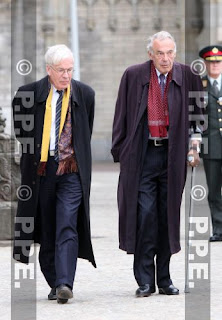 Martin Wisse has written an assessment, particularly of Van Mierlo's role as founder of the political party, D66.

Photo: Hans van Mierlo (red scarf) with H.D. (Herman-Diederik) Tjeenk Willink, Vice President of the Council of State, on their way to the Royal Palace, 2009; courtesy P.P.E.
Posted by JayV at 7:05 AM