Bruce Graham, an architect with integrity 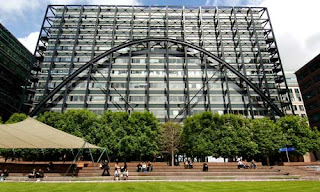 If I had the talent, my life would have taken another course and I would have been an architect. Bruce Graham has died at aged 83.

"Quick-witted, curious and always alert, Graham seemed to capture the spirit of the age from the mid-1970s to the 1990s. In a sense, he reinvented the role of the architect, recognising that the job is just as much about city-making and power-broking as it is about pure design talent, which Graham possessed in spades."

I love the above photo by Linda Nylind.

"... the exposed structural arches of Exchange House (1990) that effortlessly span 80 metres above the railway tracks leading to Liverpool Street station in London..."

I frequently took trains into and from the station when I lived in London 10 years ago and was always amazed by those arches. I love buildings with that kind of integrity!

"Let me describe the difference between my idea of architecture and a lot of other architects. Number one, architecture is not painting or sculpture. Architecture is much more like music, which has an element of lime. Architecture is about space and movement. It's four-dimensional. I learned that very early when I went to Chartres Cathedral. I walked up the hill and found the square and then the church and walked in, and this fantastic space opened up. There was a funeral, and they were playing Mozart's unfinished Requiem. I had to cry. Moving through that space with that music was unbelievable. Space is what architecture is all about. Not only interior but also exterior. And the movement of people. That's true whether you go to Greece, or to Karnak, or to any other place and see any other great architecture of the past. I believe that modern architecture should do the same. In Chicago our advantage was that we had engineers. Structure is still essential to the creation of space, just as it was in Chartres Cathedral."