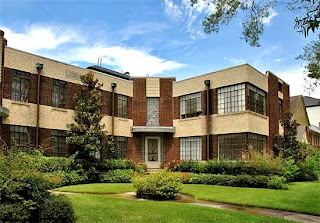 In May, the Houston Chronicle reported the 75-year-old complex was sold to Tricon Homes, a local homebuilder known for putting up new townhomes in Inner Loop neighborhoods. At the time, the company said it did not know what plans it had for the complex, which sits the corner of Ashby and Bolsover in a Southampton neighborhood.

The complex was built in 1939 by architect F. Perry Johnson with one-bedroom units arrayed in a U-shape, a floor plan common to that time period. The exterior is notable for horizontal bands of dark brown brick on the sides and parapets to mask the roof. The units, roughly 750 square feet each, have hardwood floors and faux fireplaces. The original owners had it built with central air conditioning to make the units more marketable.

The residents were previously asked to move out by July.

Well, there ya go. I lived in this neighborhood. These are charming 1930's Art Deco apartments in Houston gone to be replaced by cheap yuppie hovels. Another neighborhood trashed.

Years ago, I'd take out of town visitors on the AIA Houston walking tours.  On one tour, the guide pointed out the Medical Arts Building and sadly commented that the next day it would be demolished. True, it had fallen on bad times, and when I saw it in the early 80s it was filthy and neglected, but the design and detail were memorable. 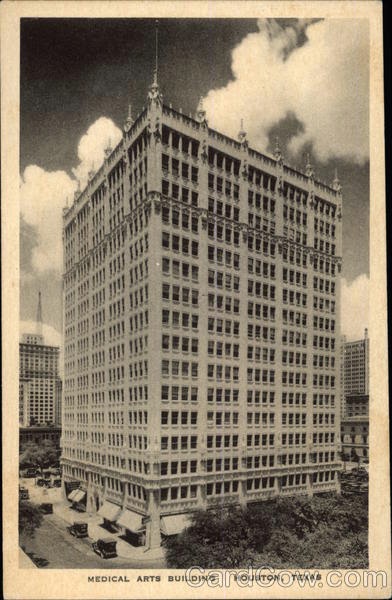 If a town has no historic features left, it shows itself to be short-sighted and lacking in the ability to recognize what is valuable and in the innovation necessary to repurpose and preserve old structures. But the developer who bought the Josephine Apartments property clearly didn't want to do that.

"Cities need old buildings so badly," Jacobs wrote in her classic "The Death and Life of Great American Cities," "it is probably impossible for vigorous streets and districts to grow without them.”


Ever since, this idea -- based on the intuition of a woman who was surveying her own New York Greenwich Village neighborhood -- has been received wisdom among planners and urban theorists. But what happens when we look at the data?

The National Trust for Historic Preservation has tried to do just this, leveraging open property-parcel data in three cities to analyze the connection between the kinds of places Jacobs was describing and the numbers that economists and businesses would care about: jobs per square foot, the share of small businesses to big chains, the number of minority- and women-owned businesses.


The novel geospatial analysis, drawn from the District of Columbia, Seattle and San Francisco, suggests that older, smaller buildings do matter to a city's economy and a neighborhood's commercial life beyond the allure of affordable fixer-uppers. In Seattle, the report found one-third more jobs per commercial square foot in parts of town with a variety of older, smaller buildings mixed in. In Seattle
, it found more than twice the rate of women and minority-owned businesses. In the District, it found a higher share of non-chain businesses.

The findings don't necessarily mean we should save all old buildings from demolition, or even that one old building is better than one new one. But they give preservationists (and Jane Jacobs enthusiasts) new data in fierce development debates over how rapidly changing and relatively older cities like Washington should grow.