It's a case of journalists acting as citizens.

Remember back in 2004 when RTE (Irish television) journalist Carole Coleman asked George Bush tough questions about the death toll in Iraq and European opposition to the invasion? This week, another Irish journalist - David Cronin - went further than Coleman. 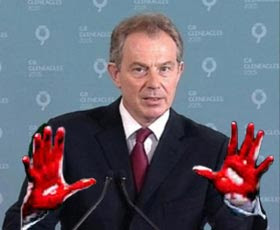 On Monday, Tony Blair, Bush's lackey and "Middle East Peace Envoy," was in Brussels to report to MEPs about his current role in the Middle East. Cronin was close by Blair and rather than ask questions, he arrested him for "crimes against peace and the crimes of aggression." Radio Netherlands correspondent Vanessa Mock asked Cronin why he confronted Blair. It was no publicity stunt.
Posted by JayV at 4:58 AM