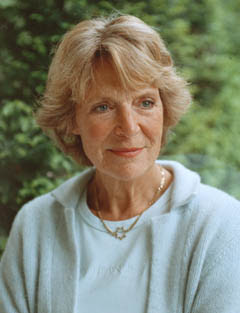 Irene van Lippe-Biesterfeld was on Dutch (satellite) tv tonight: on Het Gesprek (The conversation, a new Dutch tv channel focusing on the spoken word about one issue only instead of shallow talkshows about many issues): Een duurzaam gesprek/A sustainable conversation about ecosystems with Ilona Hofstra.

Irene is a social reformer and founder of Nature College. She manages a nature reserve in South Africa and is the author of several books, including Dialogue with Nature and Science, Soul, and the Spirit of Nature.

She is a very consistent woman who believes in what she says (in beautiful Dutch!) and who uses arguments for it. Irene is so convincing, well-read and knows what she talks about. She also understands people who have different opinions but doesn't stay in that status quo and wants to go on discussing, assessing, finding new ways. She sees everything in a bigger context. She is an Idealist, a fighter, a pioneer, in the true sense of the word. Al Gore is just a trendhopper... Irene talked about these issues 20 years ago already. She's quite critical about real measures with regard to sustainability (instead of the wordy promises).

I love when she sees

- People as part of a whole: Nature and Mankind.

- Nature is, Nature doesn't lie, doens't pretend to be.

- Sustainability is our biggest spiritual gift.

- Different sorts people are part of One Nature

- From behind the palace walls (seclusion), Irene wants to be close to people.

- When the Man and the CEO merge, the world would be a better place.

- When Economy and Ecology merge the main problem would be solved.

- Using my Title etc.: if it helps .... [Irene is titled Princess of Oranje-Nassau and is the second child of Princess Juliana of the Netherlands (later Queen Juliana) and Prince Bernhard, a prince of Lippe-Biesterfeld. She is the sister of the current Queen of the Netherlands, Beatrix.]

- Nature is without Pomp (franje in Dutch). I removed the Pomp.

- Respect to others gives inner rest.

- This Sustainable Conversation was meant to be a conversation, not an Interview, so the Princess asked some questions too...