It was 40 years ago today...that the Earth got its Day 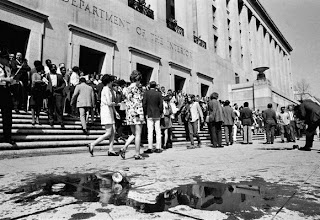 Earth Day, which was first celebrated 40 years ago, was largely created by Gaylord Nelson, a Democratic senator from Wisconsin who fought hard for environmental laws. From an essay in High Country News,

He then presented 11 measures he hoped would create what he called a national "ecological ethic." Citing the powerlessness of the era’s citizens to combat pollution, he proposed a constitutional amendment that would guarantee the right to a clean environment. He called for environmental curricula at every level of public education, and he urged a ban on the worst pesticides, the protection of wetlands, investment in mass transit and laws to protect and promote clean air.

As Nelson pressed his agenda, the Earth Day movement grew, and on April 22, 1970, over 20 million Americans -- fully 10 percent of the population -- participated in demonstrations and teaching events. Rallies occurred in scores of cities, over 12,000 schools held events and Congress recessed in honor of the day. The whole thing was as American as apple pie.... MORE

In the above April 22, 1970, AP file photo “Earth Day” demonstrators trying to dramatize environmental pollution conclude their rally at the Interior Department in Washington, leaving spilled oil in their wake. The oil was used to protest pollution by off-shore oil drilling.
Posted by JayV at 11:40 AM