The Dutch Royal family and the families of the victims attended the unveiling of the memorial monument, at the crossroad Jachtlaan-Loolaan in Apeldoorn, made by Menno Jonker, commemorating the tragedy on Koninginnedag 2009. The very moving NOS (Dutch) broadcast is now online. Photos. 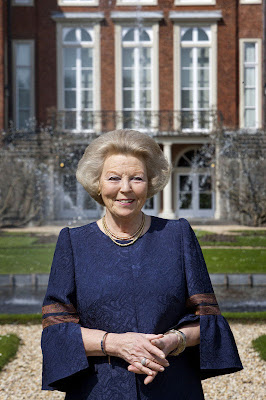 HM will celebrate Queen's Day tomorrow in the province of Zeeland, where I have my family roots.

Beatrix Wilhelmina Armgard van Oranje Nassau. Since 1980 she’s been the queen and symbol of the Netherlands. As head of state, Queen Beatrix is elevated above all other institutions. It is her task to unite all Dutch citizens. “In accepting this office I have vowed to propagate respect for the nation.”

It wasn’t easy at first. Both her marriage in 1966 to the German Prince Claus so soon after the end of the Second World War and her swearing in as queen exactly 30 years ago this month caused an uproar that echoed far beyond the country’s borders.

43 photos to commemorate the anniversary in this Parool.nl album.

Today, HM unveiled a monument in Apeldoorn to commemorate the victims of the killings that occurred on Koninginnedag 2009.

Photo: one of the official portraits taken this month at Huis ten Bosch by Vincent Mentzel. (Courtesy RVD)
Posted by JayV at 10:52 AM