Historical Find: Lighting that fire with a sex toy 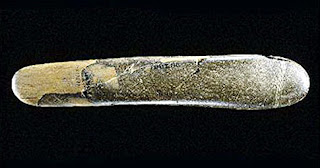 The world's oldest sex toy was more than just a feel-good aid. The 30,000-year-old siltstone phallus doubled as a tool to ignite fires.

The racy relic was found in a cave in Germany and is being studied at the University of Tubingen there, according to Independent Online.

The find was a rare one since examples of masculinity from that period are unusual to stumble upon, although female-inspired works of art are rather common.

The prehistoric phallus, which has marks where it was obviously used for striking against flints, also features carved rings around one polished end. Researchers say it's easy to see what it was used for.

Photo: University of Tübingen
Posted by JayV at 4:30 PM