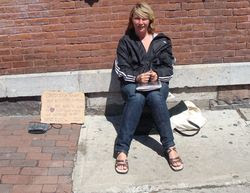 A proposed ordinance being reviewed by Burlington City Councilors could ban people from sitting on the sidewalks of five key downtown streets that feed onto the Church Street Marketplace.

The ban would also extend to sandwich board signs or other types of advertising, though it would allow any existing licensed "encumbrances" to continue until their license expires.

Ain't this in a kick in the pants! Indeed, the public spaces in Burlington have now become white bread fucking elitist and the city council has turned itself into a class(ism) act!

Then, there's this appalling NIMBY resolution:

On Monday, too, the council voted 10-4 to oppose the issuance of an Act 250 permit to Phoenix House to operate a 20-bed transitional house on Elmwood Avenue, just a half block from the top of Church Street. The opposition to the proposal was fueled, in part, by downtown business concerns that it would add more "undesirable people" onto the Marketplace and detract shoppers from coming to the pedestrian mall.