Thinking about the new use of "curated." 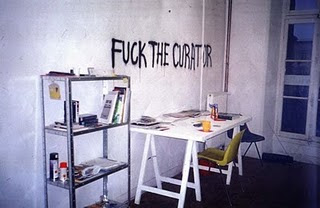 Not so fast, BFP. The use of the word is not as "newfangled" as you thought, and you certainly didn't coin it. As I read today on JEREMIAH'S VANISHING NEW YORK:--

I like thinking about how words are used and how they travel virally through groups of people. Words like "Doucheoisie," and prefixes, too, like "Celebu-." And now, thanks to a few blog posts about the opening of Mast bookshop on Avenue A, I'm thinking about the word "curated" and what it means these days.

The Times actually did a whole story about this word in 2009. They wrote that curate:

- "has become a fashionable code word among the aesthetically minded, who seem to paste it onto any activity that involves culling and selecting."
- "is code for 'I have a discerning eye and great taste.'"
- is "an innocent form of self-inflation."
- "can be good for one’s image and business."

"Pretentious?" asked the Times, "Maybe. But it’s hardly unusual for members of less pedigreed professions to adopt the vernacular of more prestigious ones."

So the use of "curate" is aspirational, which does put it in the same league as "artisanal." And that makes some people nervous because it signals to consumers something very specific. It signals "exclusivity" and is meant to attract people who yearn to be in the club. It may also repel people who find the use of such words pretentious and exclusionary.

In addition, museum curators really aren't happy about it.

Photo: source
via Jeremiah's.
Posted by JayV at 8:00 AM