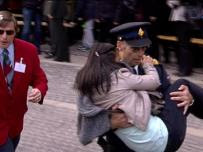 I think the idea of a bomb attack crossed everybody's mind in the flash of a second at that moment, and I didn't even hear that "bom, bom". It's also neglected that the one part of the crowd got frightened by the panic of the other part of the crowd. My initial fear was getting trampled and trapped in this "stampede" as well as what was going to happen next...
Terrifying. - a witness to the Remembrance Day disruption

It's not as if people were in a moving crowd initally. They were still, silent, in an almost meditative state on what was happening in front of the monument. Just look at the Remembrance ceremony at about 01:13:32 on this (Silverlight) video.

Then bam! A mass exodus, but to where? I'm sure there are psychological studies of crowds that would confirm what happened was real.

Many people, of course, had the tragic attack at last year's Queen's Day celebrations in Apeldoorn on their minds.

I recall feeling the terror in the mid 1990s, when I was in Amsterdam for Queen's Day. My Dutch friend and I ventured into the center of the city - what was to be our first and last time. We were nearly crushed by a crowd that was moving along the Reguliersbreestraat (between the Munt and Rembrandtplein), packed like sardines. I was never so scared in my life; got separated from my friend and could not see his head (he's taller than I am). In the middle of all of this was a man in a wheelchair, pleading to be taken away. This was just across the street from the famous Tuschinski cinema. It was stifling, I could hardly breathe. I never even thought of a bomb attack. What if... !! I was afraid that I would lose my footing, fall down and get trampled. Fortunately we eventually got out of that narrow strip of street and made it to the Rembrandtplein, which was just as crowded, but had more room. From there we recovered to the quieter Amsterdam-Zuid residential district.
Posted by JayV at 9:08 AM