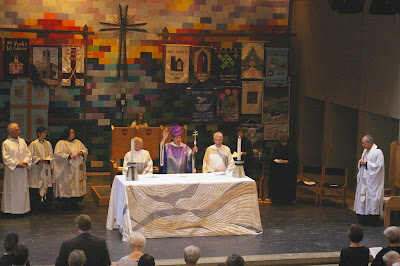 Collect for the Feast of Richard Hooker

O God of truth and peace,
who raised up your servant Richard Hooker in a day of bitter controversy to defend with sound reasoning and great charity the catholic and reformed religion: Grant that we may maintain that middle way,
not as a compromise for the sake of peace, but as a comprehension for the sake of truth;
through Jesus Christ our Lord, who lives and reigns with you and the Holy Spirit, one God, for ever and ever.

Collect for the 175th Anniverary of the Diocese of Vermont

Almighty God, you have given us this Diocese in which to carry out the mission of your Church, and this time in which to comemorate its founding and celebrate its work;
Grant us so to tend this Vine,
that your reign may grow and thrive in this good land
and bring forth the fruits of your Spirit.
Through Jesus Christ our Lord.

This weekend we are also celebrating the first anniversary of Bishop Jefferts Schori's investiture as the 26th presiding bishop of TEC (4 November 2006). 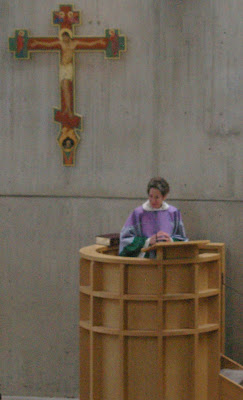 Yesterday, + Katharine held a public forum at UVM's Ira Allen Chapel on the Millenium Development Goals, which the Episcopal Church have established as a mission priority and response to global poverty. Did you know that in the time it takes to read either of the two Collects above - about 30 seconds - one child has died from the scourge of malaria?

But you wouldn't know it, if you read Sam Hemingway's report today in the Burlington Free Press, where he focussed on the dissension within the wider church (and Anglican Communion) and never mentioned the PB's presentation about the MDGs. I am pleased, however, that Sam Hemingway mentioned the wonderful program started right here in Vermont and supported by the diocese, the New Sudan Education Initiative. Too bad he didn't stick around for the rest of the presentation on the MDGs. 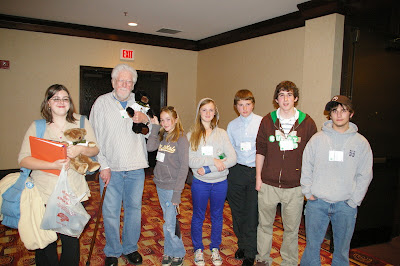 After nearly 40 years, I became re-acquainted with the Rev'd Hayward Crewe, the rector of St Martin's, Fairlee, where I was a member as a child and teenager - growing up across the Connecticut River, in Orford, NH. Hayward is now retired from the parish ministry; still going strong at aged 82 years! In the above photograph he is with the diocesan youth delegation at last night's convention banquet, held at the Hilton hotel in Burlington.
Posted by JayV at 1:41 PM