From It's a Dog's Life - Laika was a Russian space dog which became the first recorded living creature from Earth to enter orbit. At one time a stray wandering the streets of Moscow, she was selected from an animal shelter. 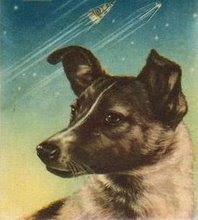 I must thank you for your responses to Saint Laika Day [link], not only at OCICBW... but on your own blogs and on other threads. I was worried that you would consider me flippant and soppy, but you all seemed to instinctively get where I was coming from. You knew I was being very serious, in deed.

Laika is one of the icons through through which I peer to contemplate Jesus on the cross. It's a gut thing rather than a worked out theology and all the more real because of that. I had thought that the story of the little dog was just a nightmare from my own childhood, but on researching this matter I found that she has become part of contemporary folklore throughout the world. I doubt if another dog has ever had so many songs and pieces of music written for and about them, both classical and popular. The number of poems concerning her is countless. And we are not just talking about people of my age and older. She is part of the culture of people born well after her iconic journey.

Of course, every day, millions of animals suffer because of human greed, viciousness and callousness. But that is the point. Through the Laika Icon we see the suffering of all God's creatures and we see Jesus dying for the sins we have committed against these innocent ones.