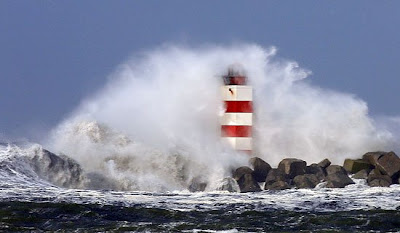 Dutch and English folks living adjacent to the North Sea held their breath for a few hours this week, but the storm surge brought the highest water levels since the disastrous floods of 1953.

In the Netherlands, Rotterdam Port halted all ship traffic until Friday evening. The Maeslant Barrier protecting Europe's largest port was closed Thursday for the first time under storm conditions since its construction in 1997.

The magnificent photo above shows waves pounding against the lighthouse in IJmuiden, the Netherlands on Thursday, just a 20 minute drive west of Amsterdam. (Marco de Swart/Reuters)
Posted by JayV at 7:53 AM