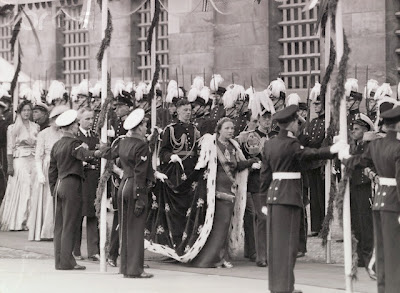 After 50 years on the throne Queen Wilhelmina, who herself became Queen at the tender age of 18 (back in 1898) 'handed down' her powers as Monarch to her only daughter & heiress, Juliana.
Amsterdam, September 6, 1948 was an exceptional day, both for the Dutch Monarchy as well for all those who wanted a new start in life after WWII. [Dutch monarchs are not "crowned."]

I had arrived in the USA with my mother a few weeks before. I was just four months old.

A fascinating NOS-documentary (in Dutch) broadcast on 5 September 2008:

1948 is recalled in the documentary: abdication of Wilhelmina, inauguration of Juliana, the celebration for the two queens, post-war rebuilding, recollections of eye witnesses of the events of 6 September: