Today is Shoah day in Israel and also the 65th anniversary of the liberation by Canadian troops of Westerbork, the Nazi transit camp in the east of the Netherlands. As Radio Netherlands reports, one of the survivors of the death camps has finally been recognised by the Dutch government,

As part of the commemorations, Selma Engel-Wijnberg was made a Knight in the Order of Orange-Nassau. Presenting the royal award, Dutch Health Minister Ab Klink praised her continuing determination to tell her story for the benefit of future generations. He also offered a formal apology on behalf of the Dutch government for the way she was treated after the war.

Now 87, Selma Engel-Wijnberg was one of the few Dutch survivors of Sobibor extermination camp in Poland and the only one still alive. On her return to the Netherlands, she had problems with the Dutch authorities. Because she had married a Polish man, Chaim Engel, they no longer regarded her as a Dutch citizen and attempted to deport her. The couple later emigrated to Israel and then to the United States. 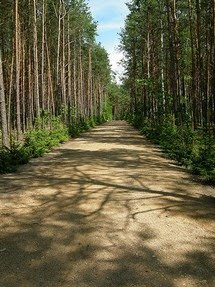 For more on Mrs Engel-Wijnberg's story - with an astounding video description of her arrival at Sobibor, click here.

"...When they opened the doors, these big doors that we had to go out, they start screaming and hitting with the whips, and, uh, we had to go out and out, and, all, all the people, and there was a little trolley, a little wagon what, uh, the coal miners use that goes, you can, uh, uh, rip it open that people can easy go out, so all the people that couldn't walk, they throwed them in there, and also children what got lost from their parents, they had to go in the trolley, and this trolley went straight to the gas chamber."

More on Sobibor, click here. On the right above is a photograph of the Himmelfahrtstrasse, or road to heaven, which led to the gas chambers in Sobibor. (Photo Jacques Lahitte)
Posted by JayV at 1:51 PM