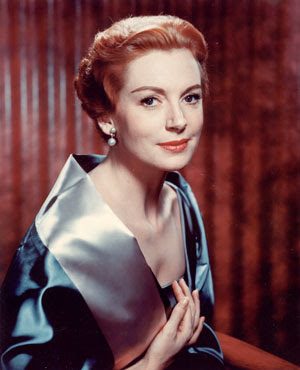 ---
She worked steadily, averaging one film a year, with directors of stature, and often opposite chums such as David Niven, Robert Mitchum and Cary Grant. The result was a career that sailed on rather majestically, like an elegant ocean liner, only occasionally hitting a squall or rough passage. There was little to interest gossip columnists or to shock the public and, at least on the surface, she seemed rather serene in the midst of such a frantic profession.
---
But it is as a screen actor that Kerr will be best remembered, since she had the beauty, the reserve and the inner quality that the camera loves.
---
In 1998 she was made a CBE, but said that she felt too frail to travel to London to receive it personally. In 45 films, in as many years, she seldom, if ever, gave a weak performance and certainly never gave a less than professional one.

I was astounded by her filmography. These are the films I loved; when I saw them I was coming out. (It certainly wasn't the Bye Bye Birdie-ish teenaged angst of the early 60s.) I could relate to the characters:

Furthermore, Mr. Anderson was employed to adapt his own play, and he has done so with a stubborn insistence on the candor and integrity of his theme. His schoolboy, an 18-year-old "off horse," is still the victim of dark suspicions of his mates. He is suspected of being unmasculine, for which his mates have a crueler name. The wife is still moved to be compassionate with her whole being toward this tormented lad. And her husband is still quite plainly something less than a bona fide man.

Still the drama is here in all its aspects—the drama of a lonely prep-school boy who finds sympathy and affection only in a woman who finds little in her man. It is a drama that teems with nuances, that clearly notes some painful facts of modern life in a stratum of society that sometimes does its children all sorts of unsuspected wrongs. And it is a drama that hints not only at some of the nastier types in boys' boarding schools but also at some of the less attractive product that is turned out by these hives of "sportsmanship."

Most brilliant and true of the performers is Deborah Kerr: She makes the shy and sad young woman... come poignantly alive.

As for the strange and distant woman who comes into their lives as a governess to handle the youngster (and as an expert on gardening in chalky soil), she is a beautifully strong and valiant lady as played by Deborah Kerr, free of the cool and prickly nature that Siobhan McKenna gave her on Broadway.