Scientific Conference on Monarchies in the EU 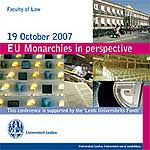 From the Dutch anti-monarchy Republicans (Republikeinen) there's an announcement of a conference on 19 October 2007 sponsored by the Law Faculty of the University of Leiden: EU Monarchies in perspective. You can register to watch it for free, too.

From the outline of the conference:

The process of European integration started in earnest in 1957. This process has both formal and informal consequences for the constitution of the member states. This conference will focus in particular on the position of the non-elected heads of state (as found in the United Kingdom, Spain, the Netherlands, Belgium, Sweden, Denmark and Luxembourg). The principal question is how these consequences can be interpreted from a multi-disciplinary perspective (constitutionally, historically and religiously).
---
On the one hand, the process of European integration could cause a gradual erosion in the sense of national citizenship and the underlying nationalism of a member state. This in turn may weaken the natural base of the monarchy in member states, particularly if the monarchy is closely connected with national sentiments. Occasionally, this nationalism has an almost transcendent dimension (for instance “God, Fatherland and Orange” in the Netherlands). Will European integration be strong enough to evoke comparable sentiments?

On the other hand, the process of European integration could bring about a nationalistic backlash which would strengthen the position of the monarchies. Such a reaction is imaginable if citizens are fearful that integration will negatively affect their sense of socio-economic and socio-cultural security.

In this scenario, citizens prefer the sense of security of the nation state, traditional nationalism and its transcendent sentiments. In analyzing these tendencies, it’s interesting to pay attention to the differences between member states. In Flanders, for instance, national sentiments are non-monarchal or even anti-monarchy. In the Netherlands on the other hand national sentiments and Monarchy go hand in hand. During the conference these questions will be addressed, as well as questions on how EU monarchies relate to EU constitutional principles, past, present and future.