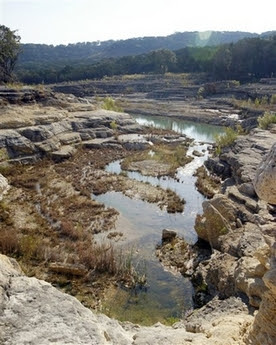 When I lived in Texas, I would frequently travel up to Canyon Lake in the Hill Country, so this story fascinates me.

CANYON LAKE — The formation of canyons, done with the flow of water over rock and time, is generally a practice in patience. But not here.

A torrent of water from a bloated Canyon Lake sliced open the earth, exposing rock formations, fossils and even dinosaur footprints in just three days. To protect Canyon Lake Gorge from vandals, it's been open only to researchers since the 2002 flood, but on Saturday, it opens to its first public tour.

"It exposed these rocks so quickly and it dug so deeply, there wasn't a blade of grass or a layer of algae," said Bill Ward, a retired geology professor from the University of New Orleans who started cataloguing the gorge almost immediately after the flood.

The gorge, which emerged where a nondescript valley covered in mesquite and oak trees once was, sits behind a spillway built as a safety valve for Canyon Lake, a popular recreation spot in the Texas Hill Country between San Antonio and Austin.

Read all of New Central Texas gorge open to public