Remigius of Rheims, Bishop, Apostle of the Franks, 1 October 530

Here are the appointed readings for use on the Feast of Remigius...

Bishop of Rheims; died 530; Patron of France. Remigius was appointed Bishop of Rheims at the age of twenty-two. He baptised Clovis I, king of the Franks; traditionally this was held to be a consequence of the influence of the wife of the king, Clotilda, herself a Christian. The event (though the circumstances are disputed) was of great importance to the formation of the French nation. Remigius was a zealous evangeliser: "by his signs and miracles he brought low the heathen altars everywhere." 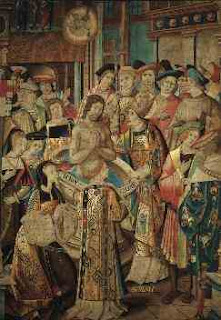 St Remigius baptises Clovis I.
Posted by JayV at 4:00 AM