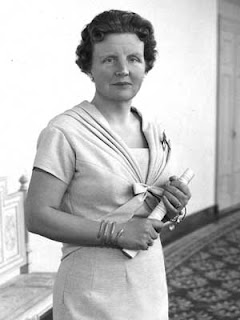 It's four years already - time flies - that our dear Queen Juliana of the Netherlands passed away. We remember that foggy day in March.
A great and warm human being. I remember traveling to Ottawa, Canada to attend the memorial service at St Andrew's Presbyterian Church (where the then-Princess Juliana and her daughters had attended services during their exile during World War II - and where Princess Margriet was baptised). 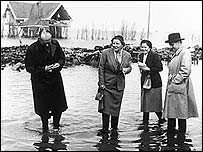 What made Princess Juliana so special was her warm heart. People do not remember her as the queen in the state portraits they saw in public buildings. The image that left the deepest impression on them was the one of her standing in the mud in her rubber boots in Zeeland during the 1953 floods, with wind-swept hair and fluttering headscarf. The expression on her face was one of deepest sympathy and powerlessness. At that moment, she was perhaps at her most royal, in the truest sense of the word: genuinely at one with her people in their hour of need and in their grief.