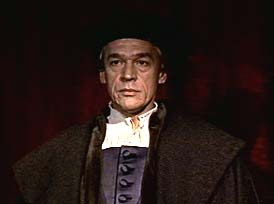 CONSUMMATE MASTER OF HIS CRAFT:

Paul Scofield, an actor best known for his role as Sir Thomas More in A Man for All Seasons and Col. von Waldheim in The Train, has died. The Times obit is here, and Benedict Nightingale has an appraisal:

Why didn't most theatregoers think of Paul Scofield in the way they thought of Olivier, Gielgud and Richardson? After all, he had pretty well all the qualities, from Olivier's danger through Gielgud's grace to Richardson's soul, that we admired in the 20th century's most renowned triumvirate.
---
There were two main reasons for his relative neglect, the first of which is a terrible comment on our honours system. He refused a knighthood, later telling me that "if you want a title what's wrong with Mr?". Sadly, this meant that when people talked of our pre-eminent actors, he tended to get forgotten or relegated below Derek Jacobi and Ben Kingsley.

The other reason is that he didn't want to be a household name, let alone a celeb. He seldom gave interviews and never appeared on chat shows, but lived quietly and modestly in Sussex, taking the local train to London when work demanded and invariably returning the same night. It was the art, not the fame, that mattered to him. He was an extraordinary actor content to be an ordinary man.