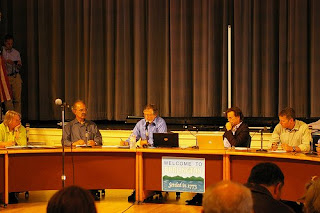 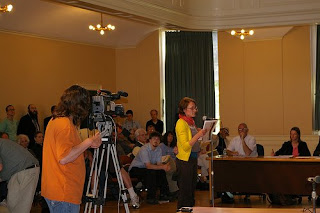 I attended yesterday’s meeting about Al Jazeera’s English language television programs continuing on Burlington Telecom. The meeting brought 100 or so people to the auditorum. Haik dropped in and has a few things to say. 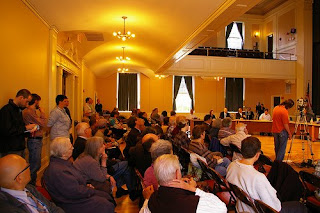 The public comment was predictable. A majority of speakers wanted BT to continue broadcasting AJE and claimed the network brings more program diversity to Burlington; gives an alternative news (non-corporatist/consumerist) to viewers; is even a respected news source in Israel (a woman and I said that, actually); the issue is about free speech; if viewers didn’t like it, they could just not watch it, switch channels or turn it off. A minority of speakers said AJE in Burlington was an affront to the Jewish community here; maintained that AJE was hateful propaganda. Paul Decelles, a city councilor said he'd never subscribe because having AJE on the schedule is an insult to the veterans who have fought and died in Iraq and other American wars. (Actually, he's a free-market capitalist and doesn't want BT tied to the city.)

I also reminded the committee that BT's Chris Burns should be reprimanded for pulling the plug on AJE without having let them know of his decision or even asking for their advice.

I'm no judge, but the small coterie of zionists who complain that AJE is a propaganda assault on Jews are projecting: this local group has a political agenda, too: Victimhood. (I have rarely seen Israelis talk about the Roma, gay, communist or slav experiences during the holocaust. I will add that Ha'aretz's opinion pages are critical of Israel policy - funny how these kinds of views never came up last night; all this is O/T and possibly the subject of another post on here.)

There was a media presence. Channel 17 will no doubt have the meeting on its website. In identical stories by Dave Gram in the Times Argus and the Boston Globe (he’s the AP stringer here) I read:

Mousa Ishaq, a Palestinian born in the West Bank who has lived in Essex Junction for 30 years, said after the meeting that Al-Jazeera is not just an Arab propaganda organ, and that those urging its removal from Burlington Telecom would find some allies in the Middle East.

"Al-Jazeera has been kicked out of every single Arab country," he said. "Arab governments do not like Al-Jazeera."

Of course they don't: many governments in the Middle East (Egypt, Saudi Arabia, Kuwait) are not democratic and oppress their citizens. Al Jazeera's in-depth reports on some of these countries goes against their rule!

So I did a quick google search “why arab governments don't like al jazeera” and found several reasons. The results also showed why our American government doesn't like AJE.

The following article below is more current (May, 2008) and even mentions BT’s carrying AJE. Read all of it for more background --

This headline should become a mantra for pro-AJE forces in Burlington!

Stebbins says the U.S. government embarked on a campaign to deligitimize Al Jazeera's journalism. "I think we still live with the legacy of that campaign," he says of the Al Jazeera English network. "They still successfully manage to associate us with radicalism."

But Al Jazeera isn't radical, he argues. Its motto, Stebbins says, is "the opinion and the other opinion," and it encourages charged and open debate. At times, that debate can become heated, especially when it comes to U.S. foreign policy. "An Al Jazeera colleague said to me, the difference is that the Western media covers the war from where the missiles were fired," Stebbins says. "Al Jazeera covered it from where the missiles landed."

These below are older stories, but noteworthy:

Neslen sees the channel reporting multiple viewpoints, journalism virtually unimaginable in the Western media, "a willingness to take risks in showing controversial images of the horrors of war, reporting from ‘behind enemy lines’, critical coverage of Saddam Hussein and George Bush alike and an avoidance of the 'news pool'."

A sign of the increasing interest being generated by al-Jazeera is the release of the film Control Room. Telling the story of how the channel decided and made the news during the Iraq war, the film has already broken box-office records in the US. With senior Bush officials accusing the station of anti-Americanism, an increasing amount of Americans clearly want to make up their own minds. The Christian Science Monitor highlighted the main thrust of the film: nobody has a monopoly on truth.

Al Jazeera and the Net – free speech, but don't say that

Essentially Al Jazeera's 'Iraqi propaganda' activities are no greater (perhaps even rather less) than those of many liberal media outlets. In the UK many of these have also been criticised by the government, but they have not been the subject of major hacking attacks, nor have hosting and services companies declined to do business with them. We should also clarify something regarding the footage of the prisoners and the dead servicemen; military spokesmen to the contrary, reproducing such images is not a breach of the Geneva Convention. The Geneva Convention is directed at governments, and does not cover news organisations. Al Jazeera has arguably broadcast images of the Iraqi Government breaching the Geneva Convention, but that is not the same thing.

To get this into perspective, note that one of the most striking pictures from the Vietnam war was of a South Vietnamese officer shooting a prisoner - do we argue that this should not have been published? If Al Jazeera had footage of an Iraqi shooting a British prisoner, should that be broadcast? The other way around? Are our standards today different from those of the 60s, or do the criteria differ depending on the nationalities of the participants and/or the audience? The answers are not straightforward, nor should they be. In deciding whether or not to report a story and how to report it news organisations have to take into account the motivation of the people they're covering, standards of taste and decency and likely impact on people involved, such as friends and family.

By Western standards Al Jazeera may have breached standards of taste and decency, and may not (again by Western standards) have sufficiently contextualised bin Laden and Iraqi exercises in propaganda. But by Middle Eastern standards Western media could similarly be accused of too readily parrotting propaganda in the other direction, and of too frequently operating a system of self-censorship. There's some merit to both points of view, the demise of Arnett being a good example of self-censorship, but there's no good reason for casting Al Jazeera into outer darkness - unless of course the problem is that its coverage has been increasingly reaching a Western audience.