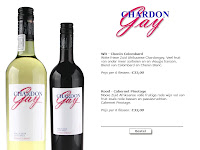 Back in 2000, a lesbian couple in Tunbridge, VT celebrated the then-new Vermont civil unions law by marketing "Gay Pride Ale" ("The beer to come out for"). I tasted it and it was just plain dreadful - the brew is no more, thankfully. Now, 24oranges reports Dutch vintners are promoting a wine product marketed expressly for a gay clientele.

...the idea of a ‘Chardongay’, which isn’t even a Chardonnay but a mix of Chenin Blanc and Colombard, while the red version (getting confused now) is straight Cabernet Sauvignon, pun intended, just sounds, well, blah. Vinamis, the company who thought this up apparently couldn’t find an acceptable cheap Chardonnay (bless you). And since we’re driving through cliché-ville, what about a rosé? It’s coming out later, as well as the bubbly.