A Symbol of Resistance 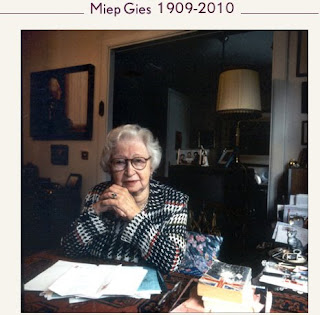 Miep looks like a pack mule. She goes out nearly everyday in search of vegetables, and then cycles back with her purchases in large shopping bags. She’s also the one who brings five library books with her every Saturday.
-- Anne Frank July 11, 1943

Last week we read about the death of Freya Gräfin von Moltke. Last night it was reported that Miep Gies, another symbol of resistance, has died.

From the Anne Frank Foundation

Miep Gies, the last surviving and best known helper of Anne Frank and the people who shared her hiding place in an Amsterdam canalside house, has died in Hoorn on 11 January at the age of 100. Right until the end Miep remained deeply involved with the remembrance of Anne Frank and spreading the message of her story. Every day she received letters from all over the world with questions about her relationship with Anne Frank and her role as a helper. “I’m not a hero’, she once said, “It wasn’t something I planned in advance, I simply did what I could to help.” Miep Gies leaves a son, a daughter in law and three grandchildren behind.

In her own words,

'I stand at the end of the long, long line of good Dutch people who did what I did or more - much more - during those dark and terrible times years ago, but always like yesterday in the hearts of those of us who bear witness. Never a day goes by that I do not think of what happened then.' -- Miep Gies on her website

For the BBC report, click here.
Photo copyright Anne Frank Stichting.
Cross posted at Antemedius and The Peace Tree.
Posted by JayV at 7:25 AM