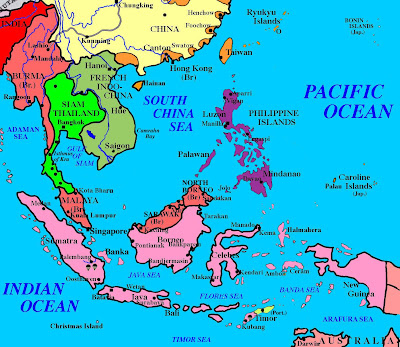 "I didn't shoot them, but I tortured them and I beat them up. I put them in the sun till they fell down. I was never told to do it - you just grow into it. Isn't it terrible? They didn't tell me to torture people, that was my own doing. I wanted to do my job well."

RADIO NETHERLANDS, in a program first broadcast in 2005 - 60 years on: the Dutch 'police action' in Indonesia - tells the stories of four former soldiers who tortured and killed Indonesian prisoners in the war of decolonisation, after Indonesia declared its independence in 1947. All the years since, they remember how they had to live in silence and shame with the secrets. They call for the Dutch government to accept some measure of responsibility for what they say they were ordered to do. Click here to read the story - and listen!!. There are two links to listen - one at the top of the page (shorter program on Quicktime) and another mid-way down (longer -Real Audio).

COMMENT: My father traveled frequently by ship to the Dutch East Indies in the 1930s as a youthful merchant marine cadet. I always asked him what it was like living in Indonesia. He didn't talk much about his experiences there, except to say that the colonisation of the Indies was not a proud moment for his country. The 400 years of occupation were full of brutality, cruelty and stupidity, he told me. Although my father didn't return to the Indies after WW II, he told me that most of the vets from the 1947-49 police actions maintained that they were sent there to liberate their land from the Japanese and also from the republican army, and that they won it. To the world, World War II was the yardstick of Dutch bravery (small country fighting Nazism). When one thinks of war crimes, the German atrocities immediately come to mind, but the Dutch have never admitted what they did in the Indies was a war crime.

There had been a silence about the Dutch in Indonesia, until the vets began confessing publicly that the mission was wrong and acknowledging the victims of the police actions. Listening to these men, it is unclear to me that telling these stories heals. Does the truth set you free? American and British soldiers can learn lessons from these stories, howver. They are doing in Iraq exactly what the Dutch forces did in Indonesia. Will it take 60 years of soul searching for Americans to confess about the war crimes they have done in Iraq?
Posted by JayV at 11:15 AM