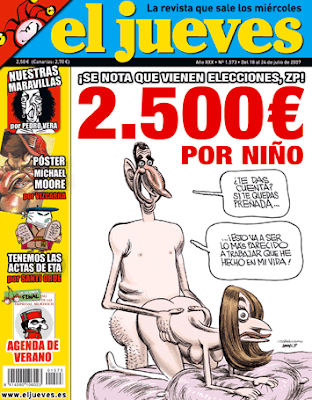 GUARDIAN - Spanish police were ordered to raid newsagents across the country yesterday to remove copies of a satirical magazine deemed to have offended the country's royal family by publishing a cartoon of the heir to the throne having sex.

The cartoon on the front cover of El Jueves magazine showed Crown Prince Felipe and his wife Letizia in the midst of an ardent session of love-making.

A speech bubble issuing from the prince's mouth makes a joke about the amount of work done by the royal family and a government decision to give families €2,500 (£1,680) for each new child.

"Do you realise what it will mean if you get pregnant?" the prince asks. "This is going to be the closest thing to work that I've ever done."

A judge at Spain's national court yesterday ordered police to impound all copies of the magazine, arguing that it contravened a law that prevents Spaniards from being "rude or insulting" about King Juan Carlos or his family. It's all here...

I don't see much of the Western or US press or liberal blogs covering this story, though the Free Press hid it in some short world news stories in the back pages of today's print edition. But in an internet search, I found that the cartoon-in-question is now for sale on eBay.