The Power of the Vermont Pigs 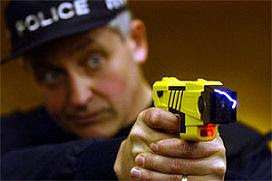 It’s obv to me that Sam Hemingway is pro-taser. Check out his shoddy inaccurate reporting in today's Free Press. Why doesn’t that paper's copy editor do his job?

Agenda or not, the implication is that they deserved to be tasered. In a story that was supposed to be 'just the facts.

In it's coverage, the Brattleboro Reformer calls the individuals non-violent protesters.

The Boston Globe just identifies them as two protesters

The man and the woman were planting flowers to protest the development of a truck stop on the Putney Road.

CBS News reported in 2004 that 70 people have died as a result of being zapped by Taser guns.

Huh, CBS News?!? That’s an outdated stat. Again, Hemingway gives a lower number to minimize the seriousness of the deaths. No where does he indicate that the numbers have increased. Amnesty International has identified over 150 taser deaths since 2001.

Sixty-one people died in 2005 after being shocked by law enforcement agency TASERs, a 27 percent increase from 2004's tally of 48 deaths, finds an Amnesty International study released today. Including 10 TASER-related deaths through mid-February of this year, at least 152 people have died in the United States since June 2001 after being shocked with the weapons.

"Despite a lack of independent research on TASER safety, police officers are using these weapons as a routine force tool -- rather than as a weapon of last resort," said Dr. William F. Schulz, Executive Director of Amnesty International USA (AIUSA). "These weapons have a record that's growing longer each week -- and it's not a good one. The increasingly frequent TASER-related deaths underscore the need for an independent, rigorous and impartial inquiry into their use."

Burlington Police are thrilled with 'em:

"It's the most effective new tool to come along in the police community in the last 25 years," Burlington Police Chief Tom Tremblay said. "We have significantly reduced injuries to officers and the number of confrontations with offenders by utilizing this tool."

First off, Chief Tremblay, it's not a tool. It kills, it's a weapon. So, because the po-lice are pro-taser, there’s no debate. Actually, there was never a debate in Burlington. BPD just started using them without public discussion. Tasers are dangerous, but the false sense of safety has caused the police to use them too freely. So much for the effects of NPA community PR: TASER use replaces the humanity and compassion that good officers develop, which make it unnecessary to endanger the public with.

I wrote last November, Last summer, Burlington Police obtained tasers to use on citizens here. Seven Days newspaper reported an incident last June where a taser gun was used on a dog. No protests were made by the Humane Society, of course.
The voice of the experts?

"The times where a Taser can cause harm are very, very, very rare," said Dr. Wendy James, an emergency room doctor at Fletcher Allen Health Care hospital who has helped Burlington develop its policies for using Tasers. "I'd much rather someone be Tased than have a bullet hole in them."

Taser International claims tasers are safe, "non-lethal" or "less lethal" They even sell a consumer version (keep your family safe), with the same effective zap as the po-lice kind. (I love these euphemisms!)

Is Dr James an expert on “non-lethal” weapons? How does Heminway know this fact? How much compensation did she receive from the BPD?

Hemingway’s story does not mention that the USDOJ is studying TASER use.

Nor does he mention Tasers new "tool". From New Scientist - Taser unveils long-range and 'scatter' weapons - there's the new XREP:

The new projectile, known as XREP can be fired from a standard shotgun. A barbed electrode sticks to the target on impact. The rest of the projectile then falls away on a short tether and another spiked electrode makes a second contact point on the target. This ensures that the two electrodes are sufficiently spaced out to affect the entire body.
---
But Neil Davison, head of non-lethal weapons research within the peace studies department at Bradford University, UK, points to potential hazards of XREP. "It combines the well-known dangers of impact projectiles – inaccuracy, potential for serious injury – with a Taser shock four times longer than usual, which also carries an increased risk to the health of the victim," Davison says.
---
Davison sees a risk that targets may be hit more than once. "My overall concern with all three developments is that they would further remove the process of human interaction, negotiation and reasoning from the decision by police to use force," he says.