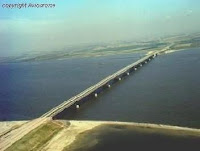 A woman driver had a close shave when she reversed on a bridge as it opened to allow boats through. De Telegraaf prints a photograph of her little blue car teetering on the edge of the Haringvliet Bridge on the A29 motorway near Rotterdam. The bridge had already been raised four metres into the air when the bridge master noticed the woman’s precarious position. The driver was able to escape from the vehicle without assistance, but the police had to rescue her dog from the back of the car. Police have decided to let her off for driving through a red light. “She’s had enough punishment,” said a police spokesperson.