‘We will not eat, meet or stay in the Disney Hotels until the workers invite us back.’ - Bishop Gene Robinson of New Hampshire at a protest for Disney hotel workers rights, July 15, 2009

I love what Bp Robinson said, because his words respect the dignity of the workers who have cared for the delegates.

Elizabeth Kaeton was there, too, and reports that a "somber," lower-level Disney management type accepted the petition. Embarrassing for Disney to get bad PR from this action, no doubt. I suspect the corporate big-wigs are just smiling with relief back at headquarters: Phew! there was no strike!!

But, if the workers had decided to go on strike or had been in the midst of one, what would TEC do/have done? It could have got real ugly quickly. Would the clergy and lay delegates have still supported the workers?

What is TEC's and Integrity's policy when vetting convention locations? Before a booking confirmation, do they investigate how the workers' rights are respected by the corporations/municipalities that own/manage the hotels and convention halls? What about assurances of a liveable wage for workers?

You’ve all heard about Disney’s support for LGBT – they’ve were even subject to a nine-year boycott by ultra-conservative American Family Association because of their ‘embrace of the homosexual lifestyle’. But their embrace no longer encompasses their employees – LGBT or straight.

If I were to book into one of the Disneyland hotels across the street – just a standard room for one person for one night – it would cost me $310-$425 plus tax. This is not cheap accommodation. Someone earning minimum wage would have to work between 48 and 66 hours just for a room – no food, no tickets. The 2150 employees of the three Disneyland Hotels have been working without a contract since February 2008. These are the people who clean the rooms, cook the meals and carry the luggage. They’re the ones doing the grunt work that makes the magic possible. 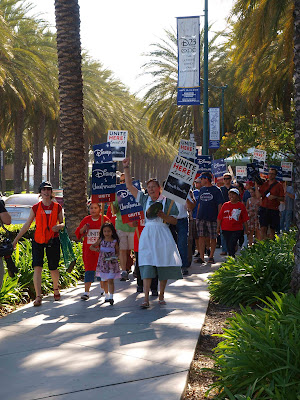 Even though Disney earned $1.46 billion in the first half of 2009, and its CEO made $30.6m, Disney plans to reduce benefits for their lowest paid employees. We all know health insurance keeps costing more – but Disney wants its employees to start paying for family coverage, and it wants to reduce full-time positions, thus forcing employees to accept positions with no benefits and no rights.

Several bishops joined the rally at the beginning, including Jon Bruno and Sergio Carranza from Los Angeles who prayed for and blessed the assembled crowd which included workers from other hotels and hospitality businesses in the area. After over a thousand people marched from the Anaheim Arena to the Disneyland gates, they were addressed by both Bishop Gene Robinson and Bishop Barbara Harris who said honest workers should get honest wages, honest benefits and honest opportunities to support their families.

Yesterday, I blogged about this action, as soon as it was announced.