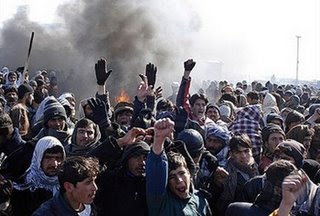 JUAN GONZALEZ: In terms of the—to get back again to other issues right now, I’d like to ask you about the continuation and expansion of the American war in Afghanistan. Do you have concerns about—that this is becoming really President Obama’s war—

HOWARD DEAN: It is.

JUAN GONZALEZ: —and the impact on our country in the future?

HOWARD DEAN: Look, again, you know—and I don’t have to say anything nice; I’m not in the administration. But I’m with Obama on his conduct of the war. I always said, when I was running against the Iraq war, that Afghanistan was different.

Let me tell you what the stakes are now. And what I find incredibly refreshing about this president is he uttered words that Lyndon Johnson never said, which is that we cannot win this war militarily. He knows that from the get-go. Here’s what’s at stake. It’s not just the Taliban. I think we could probably control the Taliban and the al-Qaeda in the Northwest territories by doing some of the things we’re already doing—drones and air power and so forth. Roughly 50 percent of the Afghan people are women. They will be condemned to conditions which are very much like slavery and serfdom in a twelfth century model of society where they have no rights whatsoever. So, I’m not saying we have to invade every country that doesn’t treat women as equal, but we’re there now. We have a responsibility. And if we leave, women will experience the most extraordinary depredations of any population on the face of the earth. I think we have some obligation to try and see if we can make this work, not just for America and our security interests, but for the sake of women in Afghanistan and all around the globe. Is this acceptable to treat women like this? I think not.

AMY GOODMAN: We just interviewed an Afghan parliamentarian, Dr. Wardak. She said the opposite. She said, yes, she agrees with you on the way women are treated, but that this is worsening the treatment, that the increased number of civilian deaths in Afghanistan, the huge number of troops that are coming in right now, are alienating the Afghan population.

The above is an extract from an interview last week on Democracy Now! with Howard Dean, former Governor of Vermont and establishment Democratic celebrity. It was also included in a post at Ten Percent, which I also recommend to BI readers for further context on the escalating, brutal war in Afghanistan.

Cross posted at Antimedius and The Peace Tree.

Photo: Ghazni protest in February against an attack on civilians by coalition forces.
Posted by JayV at 5:48 PM